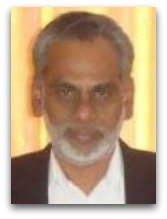 In hmolscience, DMR Sekhar (1952-) is an Indian chemical engineer and mineral engineer noted, in religious thermodynamics, for his theory of “genopsych” (or genpsy), a contraction of gene + psyche, an hypothesized biological extensive-like thermodynamic property, which is is god or a part of God inside of humans, that is argued to operate counter to entropy, a type of conscious ordering force acting in the biosphere, thus reconciling the disorder view of second law of thermodynamics with evolution and creation. Sekhar seems to have conceived of his theory in the mid 2000s, promoting it in various blogs and discussion boards, later submitting a draft article of this theory, titled “On the Incompatibilities of the Second Law of Thermodynamics, Primary Instincts, Natural Selection, and the Properties of DNA” (see: attached PDF), to the Journal of Human Thermodynamics in 2007. [1]

The theory of a "genetic psychology" or genopsych, according to Sekhar, argues that the genome is conscious self-programmed entity struggling to exist and that genopsych is an extensive like emergent systems property operating counter to entropy, giving directionality to the process of evolution, causing non-random variations in the genome indicative of information creation, and is the basis of native intelligence of plants and microorganisms, such as bacteria. [2]

Although not part of his main theory, in various blog posts and discussion, Sekhar maintains that genopsych may be or is god or a part of God inside of humans [and all living beings] that has evolved people to their present form. [3] Sekhar's theory is an effort to find unification between genetics, evolution, thermodynamics, the Bhagavat Gita, and the Holy Bible. In short, Sekhar believes that the idea of genpsy has the potential to change the way people look at religions and may help some understand themselves better in the context of genetics and thermodynamics. In the latter context, Sekhar's aim is to resolve the issue surrounding the common view that entropy is a measure of disorder and that the total entropy tends to a maximum over time in isolated systems. [4]

In cessation thermodynamics, Sekhar argues that genopsych equates to the soul as the “undying and essential non-physical”, but that the soul is unchanging whereas genopsych undergoes updating and development due to evolutionary reasons. In addition, he states “the soul is described to exist without physical body whereas genopsych may not exist unattached to genes … the concept of soul allows the possibility of reincarnation while the model of genopsych probably does not.” [5]

Difficulty on theory
The difficulty with Sekhar's theory is that theories on concepts that are said to be "counter to entropy" are numerous: anti-entropy, disentropic, ectropy, ektropy, entropy ethics, entropy reduction, entropy reversal, genetic entropy, gentropy, inverse entropy, local entropy decrease, entropy islands, low entropy, mental entropy, syntropy, syntropic, teleonomic entropy, among others. To quote one example, 'syntropic' is a term, conceived by Italian mathematician Luigi Fantappié in the 1940s, which is said to describe phenomena governed by a force, opposed to entropy, which attracts living systems towards higher levels of organization and order. This, along with the rest of these terms, is exactly the same as Sekhar’s genopsych conception. The ubiquity of these similar conceptions has generally to do with a perpetual misunderstanding of what entropy means, as defined by Rudolf Clausius and used in chemical thermodynamics.

These "opposite to entropy" conceptions, in turn, are thermodynamic cousins to terms such as élan vital, panpsychism, living force, vitalism, vis viva, living being, living molecule, living matter, living organisms, living energy, living affinity, vegetable life, animal life, organic life, etc., all terms which are a weak attempt to distinguish life from non-life as is captured in the idea of the uroboros puzzle. All of this logic, however, is defunct. The correct description is to use universal terms, such as animate verses inanimate, or reactive verses nonreactive (or inert), heat driven molecules, molecules active by way of induced movement, etc. Certainly there is much to be worked out in the explanation of human movement, but the invention of luminous aether type theoretical constructs to explain biology is not the correct direction to take.