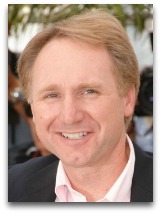 In existographies, Dan Brown (1964-) is an American author noted for []

Overview
In 2003, Brown published The Da Vinci Code, which as of 2009 had sold 80 million copies and been translated into 44 languages; the passages discussing the connection of Osiris and or Horus to Christianity (see: Osiris-Horus) are as follows:

“Langdon sensed Fache did not see at all. Jacques Sauniere was con-sidered the premiere goddess iconographer on earth. Not only did Sauniere have a personal passion for relics relating to fertility, goddess cults, Wicca, and the sacred feminine, but during his twenty-year tenure as curator, Sauniere had helped the Louvre amass the largest collection of goddess art on earth—labrys axes from the priestesses' oldest Greek shrine in Delphi, gold caducei wands, hundreds of Tjet ankhs resembling small standing angels, sistrum rattles used in ancient Egypt to dispel evil spirits, and an astonishing array of statues depicting Horus being nursed by the goddess Isis.”

The bulk of the discussion, on what might be called the "Brown thesis", is that Jesus was a mortal prophet, i.e. real person who had followers, who was made "son of god" by emperor Constantine (272-337) who was a pagan in religious belief:

"I thought Constantine was a Christian," Sophie said.

"Hardly," Teabing scoffed. "He was a lifelong pagan who was baptized on his deathbed, too weak to protest. In Constantine's day, Rome's official religion [see: state religion] was sun worship—the cult of Sol Invictus, or the Invincible Sun—and Constantine was its head priest. Unfortunately for him, a growing religious turmoil was gripping Rome. Three centuries after the crucifixion of Jesus Christ, Christ's followers [see: silent historians problem] had multiplied exponentially. Christians and pagans began warring, and the conflict grew to such proportions that it threatened to rend Rome in two. Constantine decided something had to be done. In 325 AD, he decided to unify Rome under a single religion. Christianity."

Sophie was surprised. "Why would a pagan emperor choose Christianity as the official religion?"

Teabing chuckled. "Constantine was a very good businessman. He could see that Christianity was on the rise, and he simply backed the winning horse. Historians still marvel at the brilliance with which Constantine converted the sun-worshipping pagans to Christianity. By fusing pagan symbols, dates, and rituals into the growing Christian tradition, he created a kind of hybrid religion that was acceptable to both parties."

"Transmogrification," Langdon said. 'The vestiges of pagan religion in Christian symbology are undeniable. Egyptian sun disks became the halos of Catholic saints. Pictograms of Isis nursing her miraculously conceived son Horus became the blueprint for our modem images of the Virgin Mary nursing Baby Jesus. And virtually all the elements of the Catholic ritual—the miter, the altar, the doxology, and communion, the act of "God-eating" [see: Osiris cakes and transubstantiation] — were taken directly from earlier pagan mystery religions."

Teabing groaned. "Don't get a symbologist started on Christian icons. Nothing in Christianity is original. The pre-Christian god Mithras—called the 'son of god' and the "light of the world"—was born on December 25, died, was buried in a rock tomb, and then resurrected in three days. By the way, December 25 is also the birthday of Osiris, Adonis, and Dionysus. The newborn Krishna was presented with gold, frankincense, and myrrh. Even Christianity's weekly holy day was stolen from the pagans"

"Originally," Langdon said, "Christianity honored the Jewish Sabbath of Saturday, but Constantine shifted it to coincide with the pagan's veneration day of the sun." He pawed, grinning. "To this day, most churchgoers attend services on Sunday morning with no idea that they are there on account of the pagan sun god's weekly tribute—Sun-day."

Sophie's head was spinning. And all of this relates to the Grail?"

"Indeed," Teabing said. "Stay with me. During this fusion of religions, Constantine needed to strengthen the new Christian tradition, and held a famous ecumenical gathering known as the Council of Nicaea."

Sophie had heard of it only insofar as its being the birthplace of the Nicene Creed.

"At this gathering," Teabing said, "many aspects of Christianity were debated and voted upon—the date of Easter, the role of the bishops, the administration of sacraments, and, of course, the divinity of Jesus."

"My dear," Teabing declared, "until that moment in history, Jesus was viewed by His followers [see: silent historians problem] as a mortal prophet . . . a great and powerful man, but a man nonetheless. A mortal."

"Right," Teabing said. "Jesus' establishment as 'the Son of God' was officially proposed and voted on by the Council of Nicaea."

"Hold on. You're saying Jesus' divinity was the result of a vote?'

"A relatively close vote at that," Teabing added. "Nonetheless, establishing Christ's divinity was critical to the further unification of the Roman empire [see: Roman recension] and to the new Vatican power base. By officially endorsing Jesus as the 'son of god', Constantine turned Jesus into a deity who existed beyond the scope of the human world, an entity whose power was unchallengeable. This not only precluded further pagan challenges to Christianity, but now the followers of Christ were able to redeem themselves only via the established sacred channel—the Roman Catholic Church."

Sophie glanced at Langdon, and he gave her a soft nod of concurrence.

"It was all about power," Teabing continued. "Christ as Messiah was critical to the functioning of Church and state. Many scholars claim that the early Church literally stole Jesus from His original followers, hijacking his human message, shrouding it in an impenetrable cloak of divinity, and using it to expand their own power. I’ve written several books on the topic.”