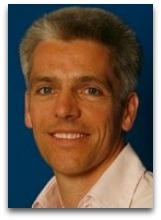 In human physics, Dan Cobley (c.1960-) is an English physicist and marketing director noted for his 2010 TED talk in which he discusses how as the marketing director for companies such as Google, Capital One, and Ask Jeeves, he employs physics concepts such as Newton's second law, Heisenberg's uncertainty principle, the scientific method, and the second law of thermodynamics to explain the fundamental theories of branding. [1]

which states that force F equals mass m of a body or object times its acceleration a; the arrow hat signifying a vector quantity, namely a value with magnitude and direction. He rearranges this equation to the form:

which he says means that:

“For a larger particle or larger mass it requires more force to change its direction. It’s the same with brands. The more massive a brand the more baggage it has the more force is needed to change its position.”

Examples he gives include the conclusion that Hoover found it difficult to convince the world it was anything more than vacuum cleaners; why Anderson Consulting had to rebrand as “Accenture”; and why companies like Unilever and Procter & Gamble keep brands separate (adjacent) rather than having one giant parent brand. He summarizes this by saying that:

The suggested conclusion is to lean towards using a portfolio of brands or new brands for new ventures.

Thermodynamics
In regards to marketing and thermodynamics, Cobley cites the following time derivative version of the second law:

which he says represents entropy increase, as mandated by the second law, where he defines entropy as the measure of the disorder of a system. He then goes on argue that in marketing these means that, in the modern internet age, as soon as a brand is uploaded, with the high-speed tools available to Internet users, the brand soon becomes dispersed, modified, and changed to the “more chaotic”. He goes on to state that this “distribution of brand energy” gets the brand closer to the people, more in with the people. The distribution of energy, he says is a democratizing force, which is ultimately good for brands. He concludes with:

“The lesson from physics is that entropy will always increase, it’s a fundamental law. The message from marketing is that your brand is more dispersed, you can’t fight it, so embrace it and try to find a way to work with it.”

One salient issue in this argument, aside from the fact that Gibbs free energy is the central driving force of marketing, is that he utilizes the rather unsound Atkins-Lambert dumbed-down “energy dispersal” interpretation of the second law and of entropy, with has little fundamental basis to it.

which he says means that means that it’s impossible to measure the state, namely both the position x or momentum p of a particle, because the acts of measuring the particle changes it, where ħ is the reduced Planck’s constant.


As with most cases of the use of the uncertainty principle extrapolated up to the human interaction scenario, however, the model leans towards the far end of unsound analogical extrapolation. [3] He says that just as when a particle is changed during the act of observation, namely when the momentum of the photon of light perturbs the momentum of particle, so to does the act of observing a consumer change their behavior. One of several examples he gives is that when surveyed people hardly admit to searching for porn, yet according to Google this is the number one searched for term. What Cobley is alluding to here, however, sounds more along the lines of the double blind placebo controlled issue, reputation affect issue, or peer observation affect, etc., than that of quantum mechanical uncertainty. The marketing message is try to measure what consumers actually do rather than what they say they’ll do.

Scientific method
Cobley states on the scientific method (which is said to have originated in the work of Francis Bacon) that you cannot prove a hypothesis though observation you can only disprove it. What this means is that you can gather more and more data around an hypothesis, which may strengthen it, but it will never conclusively prove it, and only one contradictory date point can blow the theory out of the water. He gives the example of the BP oil spill brand tarnishing, the Toyota break problem recall brand tarnishing, and the Tiger Woods fall from grace, as examples.

He gives the example of how the one robust data point of Nicolaus Copernicus to "blow" Ptolemy’s geocentric model out of the water. The parallel for marketing is that one can invest for a long time in a brand, but a single contrary observation on that positioning will destroy consumer’s belief.

This extrapolation of Copernicus "blowing" Ptolemy away with one single contrary observation, however, is a bit truncated, being that the Nun cosmology (3100-2040) based geocentric model (130AD) was not blown out of the water in a single day, but rather it took nearly five millennia, from the time of Aristarchus of Samos (c. 270 BC) up well past the time of Galileo Galilei’s Dialogue Concerning the Two Chief World Systems (1632), a defense of the heliocentric system, a publication for which he was put under house arrest for, to overthrow the 3100BC earth-centric model of the universe.

Education
Cobley completed a BS in physics (his first degree) at Oxford, prior to going into marketing. Cobley worked as vice president of branding and marketing for Capital One and was the marketing director of Ask Jeeves. In 2006, he became director of marketing at Google for central and northern Europe.