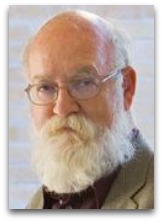 In hmolscience, Daniel Dennett (1942-) (CR=16) is an American philosopher and atheism advocate, a Ranker greatest minds (#251), oft-cited as one of the modern four horsemen of atheism, noted for []

People | Unlike atoms and molecules

In 1987, Dennett, in his “The Three Kinds of Intentional Psychology”, stated the following: [1]

“The success of valence theory in chemistry is no coincidence, and people were entirely right to expect that deep microphysical similarities would be discovered between elements with the same valence and that the structural similarities found would explain the dispositional similarities. But since people and animals are unlike atoms and molecules not only in being the products of their individual learning histories, there is no reason to suppose that individual (human) believers that p—like individual (carbon) atoms with valence four—regulate their dispositions with exactly the same machinery.”