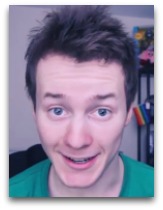 In belief studies, Daniel Sulzbach (c.1991-), aka MrRepzion, is an American YouTube personality noted for his 2011 to 2014 inside-the-mind deconversion chronological video uploads on his conversion from Christianity (2006) to atheism-curious (2008) to leaving-religion (2012) to deism (2013) to agnostic atheism (2013/14) to a retracted state of open discussion and "anti-new-atheist" (2014) in stance, though supposedly still identifying as an atheist (Ѻ), then in 2015 back to atheism-promoting; possibly similar to how people such as Peter Higgs and Noam Chomsky self-identify as atheist yet are against the new atheism movement. (Ѻ)

Deconversion | Overview
Sulzbach joined YouTube, as a teen, in a separate channel, in 2006/2007, making some videos, then with a strong Christian belief, of helping people who were going to hell.

In 2009, he launched “MrRepzion” channel, themed as a geek/gamer channel.

In 2011 had one of his favorite channels “The Amazing Atheist” was banned (Ѻ), from his parent’s house, per reasons of ubiquity of F-word profanity;

On 10 Jan 2013, made “Stepping Towards Atheism” (Ѻ), wherein he explains how he recently left Christianity for deism, how he is now, after reading books such as Richard Dawkins’ The Greatest Show on Earth (2009), which a subscriber bought him, agnostic leaning toward atheism, stating that he has believed in evolution since age 18, but that his parents are evangelical Christians.

On 23 Jun 2014, posts on his Facebook page (Ѻ), that he is going to stop making YouTube atheism videos, per the reasons: “I have no desire to talk about or defend atheism anymore”, that he is sick of these “new atheists”, that he dislikes the idea of “atheist churches”, etc.;

The following are Sulzbach’s channel stats: