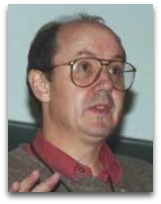 In existographies, David Christian (1946-) (CR:8) is an American-born English historian noted, in history thermodynamics, for his 2004 Maps of Time wherein he outlines a thermodynamics themed model of "big history", 13.7 billion years ago to present.

Overview
In 2004, Christian, in his Maps of Time: an Introduction to Big History, outlined what he calls "big history" a recant of time, in the context of modern science, over the last 13.7 billion years, which embeds various entropy and free energy explanations of life and civilization emergence against the context of the second law of thermodynamics, with loose connections to ideas on complexity. [1] The following gives a synopsis view of Christian's take on chaos and order in relation to humanity:

“Did the universe start out with a stock of free energy on which all ordered entities have drawn ever since? If so, where did that energy capital come from and how long will it be before it runs out? Something (or someone?) must have done some heavy lifting in the early days of the universe to create the gradients and differences that create and sustain the patterns we see around us … if it was not a creator god who did this, then how was it done?”

Christian surmises that the ultimate source of free energy and therefore, he reasons, of order, remains one of the greatest puzzles of modern cosmology. [2] Christian’s thermodynamic view of big history, and others influenced by Christian, such as Danish historian Fred Spier, who also teaches a course on big history, seem to rely heavily on the views American astrophysicist Eric Chaisson who in 1970s began teaching a course on cosmic evolution at Harvard and in 2001 authored the book Cosmic Evolution: the Rise of Complexity in Nature, an attendee at the annual big history conferences. [3] Chaisson argues that the complexity of a living organism can be measured by the density of energy flows that sustain them against the destructive pressure of the second law. Aside from Chaisson, Christian culls a bit of basic life thermodynamic views from Austrain physicist Erwin Schrodinger, Belgian chemist Ilya Prigogine, and American biochemist Stuart Kauffman, among a few others.

Big history origin
The origins of Christian’s big history teaching objective began in 1989 during discussions at the Macquarie history department, as to what type of “introduction to history” the department should teach. Christian suggested, on the theme of French historian Fernand Braudel’s suggestion that “the way to study history is to view it as a long duration”, that they begin with the beginning of the universe itself, and in the years to follow, with help from colleagues in other departments of the university, he single handedly developed a big history course of teaching. [4]

Education
Christian completed his BA, in modern history from Oxford in 1968. In circa 1970, while tutoring at University of Western Ontario, Canada, he completed his MA. In 1974, Christian completed his PhD on Russian history at Oxford with a dissertation on “Administrative Reforms Under tsar Alexander I”. From 1975 to 2000 he taught Russian history at Macquarie University in Sydney, Australia. In 2001, he accepted an invitation to teach “big history” at San Diego State University, a subject he helped to initiate not taught at various universities around the world. [4]