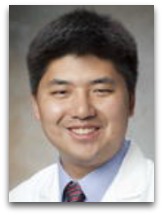 In existographies, David Y. Hwang (c.1979-) (SNE:10) (CR:41) is an American chemist, neuroscientist, and physician noted, in human thermodynamics, for his 2001 article “The Thermodynamics of Love”, written while a senior at Emory University, in which he outlined, in a somewhat jokingly, albeit semi-accurate manner, some of the basic rules and principles in the thermodynamics of human chemical reactions; the following being Hwang's abstract: [1]

“Two people who fall in love with one another are often described as having a certain personal ‘chemistry.’ Although most people would probably be quite content with accepting this convention at face value, the truth is that the correlation between romance and everyone's favorite branch of the natural sciences runs quite deep. In fact, while the terminology of thermodynamics explains the spontaneity of chemical reactions very well, it also applies directly to various factors determining the success of human relationships.”

Also, among HCR theorists, Hwang was also one of the first, aside from Johann Goethe (1809), Jeremy Adler (1987), Libb Thims (1995), and Chanel Wood (2007), among a few others, to write out human reaction formulas, i.e. chemical equations, using symbols and reaction arrows, such as shown below, using Hwang notation:

which equates to the following, using Bergman-Goethe reaction notation:

Education
Hwang, in 2000, was a visiting biochemistry student at Oxford University, St. Edmund Hall, in 2001, he competed his BS in chemist at Emory College, in 2006 he completed his MD at Harvard Medical School, in 2010 became board certified in neurology, and currently is an assistant professor of neurology and staff neurointensivist at Yale Medical School. [3]