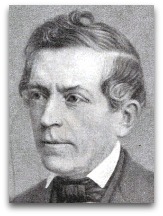 Overview
In 1835, Strauss, in his Life of Jesus: Critically Examined, argued that Jesus Christ was an historical figure, but not divine, and that he miracles of the Bible were not mistaken perceptions, but rather meaningful myth. [1]

Isis | Mary
Strauss, of note, never mentions Osiris or Horus, the actual syncretistic god pre-scripts to Jesus mythology (see: How Osiris Became Jesus); and only mentions Isis, the pre-script goddess to the Virgin Mary, once as follows:

“The author of the Natural History of the Great Prophet of Nazareth is, in this instance, to be considered as the worthiest interpreter of Paulus; for though the former could not, in this part of his work, have made use of Paulus’ Commentary, yet, in exactly the same spirit, he unreservedly avows what the latter carefully veils. He brings into comparison a story in Josephus, according to which, in the very time of Jesus, a Roman knight won the chaste wife of a Roman noble to his wishes, by causing her to be invited by a priest of Isis into the temple of the goddess, under the pretext that the god Anubis desired to embrace her. In innocence and faith, the woman resigned herself, and would perhaps afterwards have believed she had given birth to the child of a god, had not the intriguer, with bitter scorn, soon after discovered to her the true state of the case. It is the opinion of the author that Mary, the betrothed bride of the aged Joseph, was in like manner deceived by some amorous and fanatic young man (in the sequel to the history he represents him to be Joseph of Arimathea), and that she on her part, in perfect innocence, continued to deceive others. It is evident that this interpretation does not differ from the ancient Jewish blasphemy, which we find in Celsus and in the Talmud; that Jesus falsely represented himself as born of a pure virgin, whereas, in fact, he was the offspring of the adultery of Mary with a certain Panthera.”

Nietzsche
In 1873, Friedrich Nietzsche, supposedly, published a work that had been influenced by the ideas of Strauss.