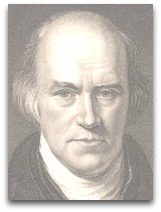 In existographies, Davies Gilbert (1767-1839), born “Davies Giddy”, was an English mathematician, noted for []

Overview
In 1792, Gilbert, according to James Watt (1792), is said to have used Newton’s calculus method of “fluents” and “fluxions”, in court, to graphically calculate the area under the pressure-volume curve of Jonathan Hornblower’s (Ѻ)(Ѻ) compound steam engine (1781), which Gilbert called “efficiency”, which is now called “work” or PV work in modern terms. The details of this purported mathematical “integration” pressure-volume work of a steam engine, however, are incomplete; the following is one synopsis:

“From MSS (Ѻ) in the Royal Institution in Truro it is apparent that Gilbert had obtained a mathematical expression for the expansive power of steam that was formally similar to that of Daniel Bernoulli. This would, therefore, have been the first time it had been realized that in the case of an actual, expansively operated steam engine the work done (in this case Gilbert denotes this as the ‘efficiency’) is given by the area under the pressure/volume curve: in other words, the area under the indicator diagram. The modern symbol for this, of course, is: ∫ PdV = W. In fact, this involved integration [fluents] and not differentiation [fluxions], so Watt should have referred to ‘fluents’ rather than ‘fluxions’, but this is technical quibble.”

This summary, to clarify, is an anacronym, per reason that it was not until 1796, four years after Gilbert’s court presentation, that the “indicator diagram”, as we now understand it, was invented by John Southern, albeit likely stimulated or spurred into exception, via the guidance of Watt, by the Gilbert court appearance.

Quotes | On
The following are quotes on Gilbert:

“They have brought Mr. Giddy, the high sheriff of Cornwall, and Oxford boy, to prove by fluxions, the superiority of their engine [Hornblower engine, 1781], perhaps we shall be obliged to call upon you to come up Thursday to face his fluxions by common sense.”