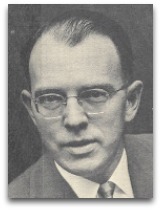 In hmolscience, Dean Wooldridge (1913-2006) was an American child prodigy turned physicist, aerospace engineer, and "through-going physics-based mechanistic materialist" philosopher, of a Charles Sherrington flavor (e.g. he cites Gosta Ehrensvard, 1960), noted for his 1968 The Mechanical Man: the Physical Basis of Intelligent Life, wherein he lays out the view that human functions and properties, e.g. behavior, intelligence, consciousness, personality, and free will, etc., are entirely reducible to and operate according to the laws of physics.

Overview
Wooldridge’s first two books, on the application of physics to the biological realm were: The Machinery of the Brain (1963) and The Machinery of Life (1966) wherein he attempted the “reducibility of biology to physics” in his words. [2] The content of these first two books, in turn, was shortened and simplified, making it more accessible for non-scientists, into chapters 1-6 and 13-15 of his The Mechanical Man: the Physical Basis of Intelligent Life (1968), wherein he expands with chapters on the physical science of: intelligence, personality, and free will.

Soul | Reductionism
Wooldridge mentions the "soul" in three places; first in respect to consciousness, noting that the ancients, i.e. Egyptians, believed that the heart was the seat of the soul, but that with recent surgical achievements involving heart modification, and artificial heart replacement near—a milestone completed in 1982 by Robert Jarvik—that the heart is now proved to be irrelevant to consciousness (and in turn the soul); the second and third usage, is in his end section five “Implications of the Physical Explanation of Biology”, is the rather peculiar view that conscious is akin to a light bulb, according to which when the current or power is turned off a person is “dead” and when the power is turned on the person is “alive”, but wherein we do not attribute these properties to the bulb, so should it be with consciousness, according to which:

“A state of consciousness whose existence and properties are completely determined by the operation of the laws of physics in the material of the brain, and which experiences death and rebirth several times a minute, would appear to leave conventional religion very little to work with. With no independently surviving soul to reward or punish in an afterlife, there can be no purely religious compulsion toward acceptable social behavior.”

This type of reductionism to reality reasoning, according to Thomas Georges (2013), is both amazing and disturbing because it upsets a “lifetime of Catholic doctrine about the immortality of the soul and the spiritual nature of the human mind.” [1]

Religion
Wooldridge's style of writing was of the implicit atheism and or atheism defense variety; the following quote is one example:

“With the general recognition of the meaninglessness of the traditional and essentially mystical concepts of ‘right’ and ‘wrong’, will immorality and crime run so rampant that human society will become impossible? Almost certainly not. Indeed, there is evidence that the incidence of crime and immoral behavior is any higher in several large atheistic countries that exist today than in the Christian democracies. According to our mechanistic point of view, a tendency toward moral behavior is a genetically determined, evolutionary developed physical property of the human animal, just like the number of fingers and the size of the brain.”

Wooldridge, of note, in 1936, after receiving his PhD, married Helene Detweiler, a Methodist minister’s daughter who had obtained her MA in social work from the University of Southern California, and according to Dean’s son, Jim Wooldridge, that the 65-year marriage (up to her passing in 2001) was a strong one. There dialogue on this topic, no doubt, would have been similar to Francis Crick and his wife Odilie Watson (1920-2007) and her childhood confusion about the soul as "living bean" (bean NOT being) model of right and wrong.

Education
Wooldridge, cited as a child prodigy, graduated from high school at age of 14, entered the University of Oklahoma (Ѻ), via a scholarship obtained by winning a typing contest (200 words per minute), wherein, originally aiming to study law, he completed his BS in physics (Ѻ) in 1932 (age 18) and his MS in 1933 (age 19), and then completed his PhD in 1936 (age 23) in physics (summa *** laude), under electromagnetism expert William Smythe (also PhD advisor to laser inventor Charles Townes), studying the separation of isotopes (prepared an isotopically enriched target of carbon-13) (Ѻ). He then went to work for Bell Labs, where he supervised the first air-born fire-controls system; later forming the TRW Corporation, which built one of the first American spacecrafts. [4]

“The impressive past successes of physical science in transferring one after another of the details of human experience out of the supernatural into the realm of the understandable — including: rain and wind, lightening and earthquake, and the rising and setting of the sun and stars, which have long since been accepted as manifestations of the workings of the laws of gravity, mechanics, thermodynamics, and electricity — inspire the present attempt to account for the origin and properties of organisms, including man, e.g. behavior, intelligence, consciousness, personality, and free will, by means of the principles of physics.”

“Even the existence among the laws of a principle of indeterminacy limiting the precision with which the future can be predicted does not permit entry of caprice into the world of the physical scientist. Within a calculable and frequently very narrow range of uncertainty, the future is completely determined by the past. Given the laws and the particles, all else follows inexorably.”

“The properties we call lifelike that differentiate living cells from inanimate matter result directly from the nucleic acid and protein enzyme mechanisms, and a complete explanation of these mechanisms is possible in terms of the operation in inert chemical ingredients of ordinary laws of physical science.”