In non-existences, death does not exist, the parallel to “life does not exist”, is the purview that “death” is a thing, event, or spacetime moment, that does not exist; an imagined non-reality; that what one formerly refers to as “death”, is, in reality, but a separation of the elements, and therefore while “analysis” exists (compare synthesis), death does not (Empedocles, c.450BC); that death is an “anthropism” not recognized by physics and chemistry, and therefore does not exist (Sherrington, 1938); that death is a culturally-ingrained religio-mythology based concept, e.g. “god giveth life; god taketh away”, much of which verbalized, etymologically, by the Egyptian mythology based Greco-Roman god Mor, e.g. mortality, mortuary, vis mortua, etc., according to which death is a mythical concept, and therefore not real.

Empedocles
The following quote statement by Empedocles on the falsity of belief in life and death is renowned:

“There is neither birth nor death for any mortal, but only a combination and separation of that which was combined, and this is what amongst laymen they call ‘birth’ and ‘death’. Only infants or short-sighted persons imagine any thing is ‘born’ which did not exist before, or that any thing can ‘die’ or parish totally.”

“When the elements have been ‘mingled’ in the fashion of a man, and come to the light of day, or in the fashion of the race of wild beasts or plants or birds, then men say that these ‘come into being’, and when they are ‘separated’, they call that in common parlance, death .... let not the error prevail over the mind that there is any other source of all the perishable creatures that appear in countless numbers.”

“There is no coming into being of aught that perishes, nor any end for it .... but only mingling, and separation of what has been mingled.”

In other words, in modern parlance, using the adjacent diagram for illustration, when an atomic aggregate or "being" comes into existence, e.g. carbon monoxide CO, we do not say that it gains "life" or conversely that when it is separated, and goes out of being, into its components, that it "dies", because chemistry and physics to not see things this way. This logic, according to Empedocles, applies to other larger atomic formations, such as plants, animals, or humans.

There general non-death and non-birth ideology, to note, is also found, sometimes, attributed to the sayings of Leucippus (c.500-450BC) or Anaxagoras (500-428BC) two contemporaries of Empedocles, albeit of different branches of the tree of Greek philosophy.

“Birth is the aggregation of atoms, death is their disaggregation or destruction of atomic composite, without anything being derived from nothing and nothing going into anything in the process.”

— Leucippus (c.460BC), and or the analogous views of Empedocles and Anaxagoras [2]

Greek philosopher Anaxagoras (500-428BC), like Empedocles, was also said to have held the atomic theory view that “birth is the aggregation of atoms, and death is their disaggregation or the destruction of the atomic composite, without anything being derived from nothing and nothing going into anything in the process. [7]

Sherrington
In 1937-38, Charles Sherrington, in his University of Edinburgh Gifford Lectures, turned 1940 book Man on His Nature, building on the earlier arguments of Jean Fernel (1548), who attacked the Aristotle model of life, hammered away on the defunct theory of life point of view, page after page, such as exemplified by the following statements of many on this difficult subject that has beguiled thinkers for millennia:

“Both the scientific and the everyday elbow are one and the same system of electrical charges. It is of no use asking physics and chemistry whether it is alive. They do not understand the word.”

“When physics and chemistry have entered on their description of the perceptible, life disappears from the scene, and consequently death. Both are anthropisms.”

Lotka
In 1925, Alfred Lotka, in his "Regarding Definitions" chapter, of his Elements of Physical Biology, basically said that any physico-chemical scientist who attempts to defined life or explain the origin of life using chemistry, physics, and or thermodynamics is but someone hunting for a Jabberwock; the resulting argument they produce being by Jaberwocky or scientific nonsense (see: Lotkean Jabberwocky).

Thims
In 2016, Libb Thims, building on Lotka, Sherrington, Fernel, and Empedocles, and many others, basically summarized things via the following diagram, wherein the middle shows a basic molecular evolution table, subatomic particles to hydrogen to man (see: hydrogen to human), the right side shows a Lotkean Jabberwock, shown with a chemical reaction above and below him, and at the far left, is an imaginary "life/non-life" sliding bar, which the Jabberwocky-hunting scientist attempts to move up and down to fit their argument:
: 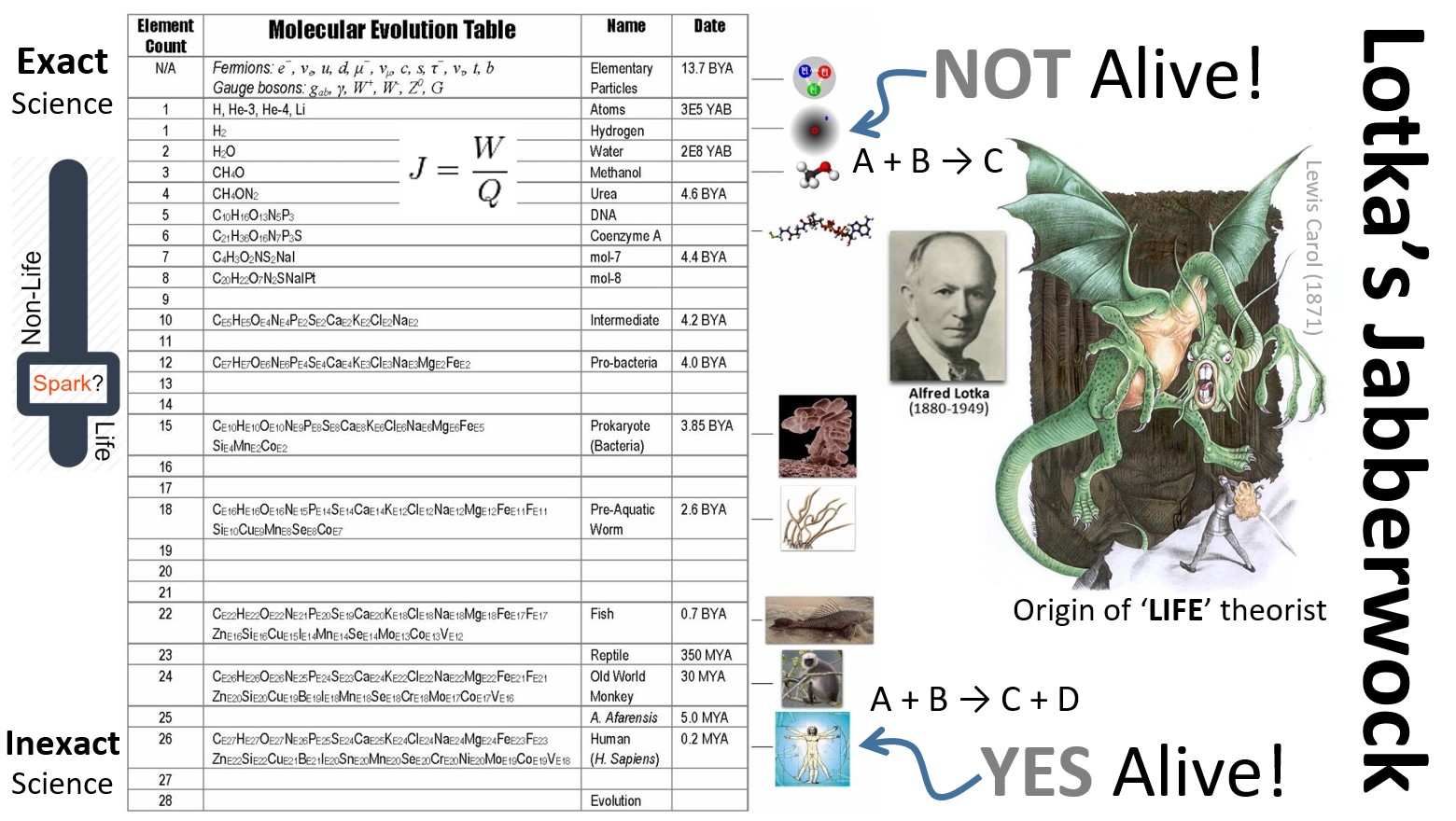 Shown on the molecular evolution table, is the mechanical equivalent of heat equation, which holds up and down the entire table, at every single row, which is the equation behind the first law of thermodynamics. The second law also hold up and down the table. The combined law of thermodynamics also holds up and down the table. When, in short, one gets to the imagined "start of life" row, wherein, in their mind, they attempt to make a "living chemical reaction", e.g. A + B → C + D, is the form of the human reproduction reaction (a double displacement reaction), which is the out of a standard, deanthropomorphized, "chemical reaction" (e.g. A + B → C), both of which being governed by one and the same combined law of thermodynamics:

becomes, in some imagined "magical" emergence mechanism, the following:

is where the Jabberwocky hits the fan, so to say, one therein one comes to the absolute realization that both "life" and "death" do not exist. [3] Hence, to go through a simple, albeit time-scale truncated example, when hydrogen H reacts with hydrogen H, to form dihydrogen:

There is no “life” or “death” involved in any step of the mechanism. Likewise, when dihydrogen H₂ reacts with oxygen O₂ to form water H₂O:

There is no “life” or “death” involved in any step of the mechanism. Similarly, if methane CH4, a "carbon-based" (or CH-based) species, reacts with oxygen O₂, to form carbon dioxide CO₂ and water H₂O:

which technically is a double displacement reaction of the form, where the germ cell G1 (sperm) of the male combines with the germ cell G2 (egg) of the female:

There is no “life” or “death” involved in any step of the mechanism. Because, accordingly, of our ingrained anthropisms, we are conditioned to "believe" that the latter reaction involves "life", is some sort of "living chemical reaction", and or originated from a "spark of life" (e.g. warm pond model) or on a heated clay substrate (e.g. clay substrate model), among dozens of other convoluted models (see: life models), whereas the former three reactions involve no "life". Correctly, the latter types of reactions, involving large forms of CH-based species, e.g. CHNOPS+ species, are but reactions that form more complex types of powered-animation (see: animate things). The motion and animation exist in these latter forms, but "life" and "death" do not.

See also
● Afterlife does not exist