In science, definitions of life, or "life definition" model, as contrasted with the life principle approach, refers to lists or collections of comparative attempts to define or quantify the term "life" or the theory of life by a set of criterion or specifications.

Overview
In 2000, a “What is Life?” conference was held in Modena, Italy, attended by about a hundred scientists, philosophers, and theologians, during which a debate erupted in respect to what the first form of life was and definitions of life. [1] Soon thereafter, various scholars began to amass and analyze lists of definitions of life, including: one by Russian bio-chemist (chnops-chemist) Vladimir Kompanichenko, two versions by American bio-logist (chnops-ologist) Radu Popa (40-definition, 2002; 90-definitions, 2004), one by Italian embryologist Marcello Barbieri (60-definitions, 2003), and one meta-analysis list by Russian-born Israeli molecular bio-physicist (chnops-physicist) Edward Trifonov (123-definitions, 2011). [2]

Analysis
The following table, compiled by Trifonov, shows the combined vocabulary of words used in the 60-definition set of Barbieri and the 90-definition list of Popa, yielding a non-redundant total size of 123 definitions:

The following shows the same table, albeit organized by common group: 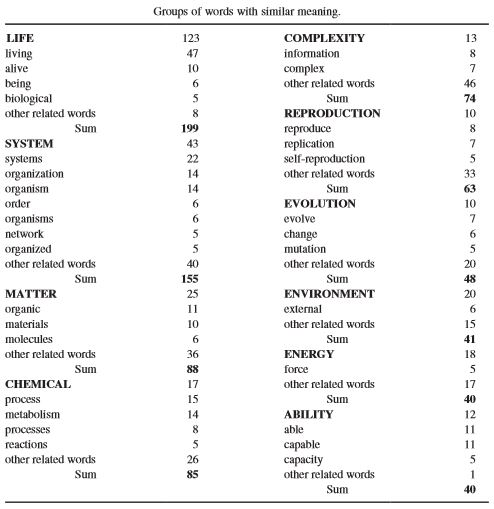 The first categorical grouping is but a grouping of what is called the circular definition technique, plain and simple:

“What about other definitions of life? (Wordle scramble) Wikipedia, for example, posts that Life is a characteristic that distin­guishes objects that have self-sustaining biological processes from those which do not. The difficulty with this definition is that it refers to biological processes. Biology – as explained by Wikipedia – is defined as the study of life. Here we turn in a circle. This is elegant but not helpful.”

— Uwe Meierhenrich (2012), “Life in its Uniqueness Remains Difficult to Define in Scientific Terms” [7]

The use of the prefix "self-" in the sixth dominate group (reproduction) is but code for perpetual motion of the living kind, and hence not acceptable scientifically, because perpetual motion does not exist. The fifth dominate group (complexity) is but a meaningless word-helot way of camouflaging emptiness of content (i.e. complexity theory), the concept of "information", for example is not an SI unit, hence not quantitative. The rest are all about relatively acceptable, the central issue with them all is that they each in turn begin to fall apart as one descends down the great chain of being into the pure fermion (matter) boson (energy) realm of atoms, molecules, and reactions, at or about the virus so-called life/non-life divide, at which point confusion sets in, after which one is forced to take recourse in (a) panbioism, (b) emergence, or (c) defunct theory of life, only the latter of which is the correct option, being that the middle choice it but soft-panbioism, according to which one has concede to the conclusion that the hydrogen atom is sort of alive, which is but a "recital that trips along simply as a fairly tale" as Charles Sherrington put it.

Discussion
In 2008, American physicist Michael Brooks summarized how traditionally there have been three ways to unravel the essential nature of life: first, find and quantify the supposed “origin” point of life; second, build something that is supposedly “alive” from scratch; third, is the definition method. Brooks comment, in summary of the three, that the latter is widely admitted to be a dead end: [6]

“[The third option to unraveling the essence of life is] to sit down and think about what exactly is it that marks the difference between living [matter] and nonliving matter and come up with the definition of life. It is this latter path that is perhaps the most well trodden. It is also the one widely admitted to be a dead end.”

The same is the case with the search for a definition of life, wherein the punch line is that there is no such thing as “life”, just as there is no missing dollar, both are things the inquisitor are “told” exist, but in reality do not exist.

The latter takes a bit longer to see through the riddle, being that we as a lineaged culture having been told that life exists for some 5,000+ years now, since at least the time of Heliopolis creation myth (3,1000BC), i.e. sun life death theory (Ra theology), assumed logic which has been passed down to us from our parents and culture, through generally the Ab-ra-ham-ic theologies and B-ra-hma-ic theologies, a group which dominates the thinking mindsets of over 75-percent of the modern world, but a concept not in accordance with modern physical science, which “does not recognize the term life” as Charles Sherrington famously put, in respect to chemistry, it in 1938: 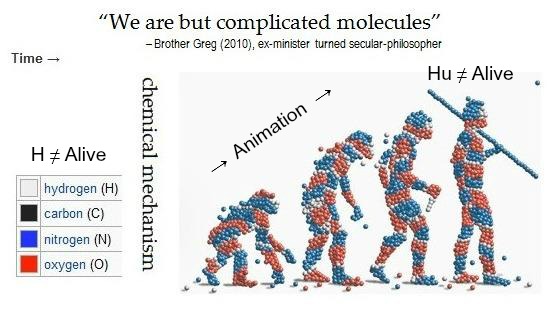