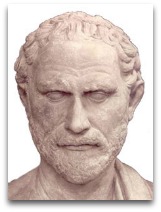 Quotes | On
The following are quotes on Demosthenes:

“A thousand Demosthenes, a thousand Aristotles can be laid prostrate by a single man of mediocre talent who has seized upon a better way to find the truth. Such a hope, therefore, must be removed: for indeed, men, more learned and superior to us in book-learning, will be found who, to the same of nature itself, can make that which is, in fact, false, true.”

— Galileo (1632), Dialogue on the Two Chief World Systems; cited by Guericke in "Preface" to Magdeburg Experiments [1]

“Hitchens was wonderfully witty, immensely erudite, seemed to have read absolutely everything, he could quote by the yard. He was a devastating wit and his opponents in debate had reason to regret taking him on. Martin Amis said that he would triumph even against Cicero and Demosthenes.”