In religious sites, Dendera Temple, aka "Denderah" (Massey, 1890) or “Dendera Temple Complex”, is a temple compound in Dendera, or Ant (Egyptian), in Egypt, 3 mi (5 km) south of Qena, 37 mi (60 km) north of Luxor, which depicts a number of scenes of the Egyptian religion, e.g. creation of the cosmos, resurrection of Osiris, immaculate conception of Horus (compare: virgin birth), etc., as these religio-mythologies existed in belief structure or belief state in c.100BC to 37AD, the time of its construction.

In 1873, Auguste Mariette, in his Dendera, published series of about 25 story-board like illustrations of carved scenes, at the Dendera Temple, of the death and resurrection of Osiris. [1] In 1904, Wallis Budge, in his The Gods of the Egyptians, Volume Two, steps through 23 of the Mariette illustrations. [2] In 1911, Budge, in his Osiris and the Egyptian Resurrection, goes through all of the Mariette illustrations, among others, to fully step through the death and resurrection of Osiris.In he following, from the Dendera Temple, shows Osiris being resurrected (or raised) by Horus: [1] 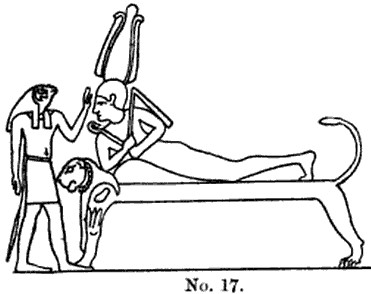 Zodiac | Horus on "cross" of zodiac

The following image (at center) shows Horus (as a falcon), from the famous zodiac (Ѻ) on the ceiling at Dendera Temple, seated above and between Anubis (water bringer) and Aan (baboon; the animal of Thoth, the moon god), which was rescripted, in part, into the motif of Jesus being crucified on a cross between two thieves, below right: 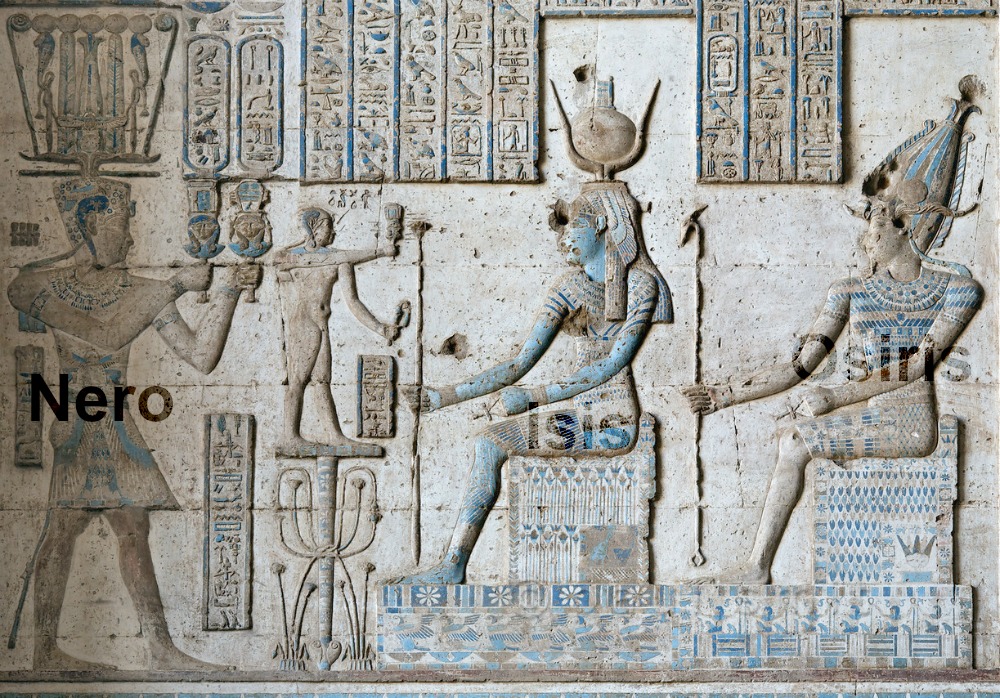 “A relief in the Hathor Temple at Dendera shows Isis (with sundisk) and Osiris sitting on thrones. The latter is actually described here as "Osiris Unefer", the last part of the name ("He who is always good") being presented within a cartouche. On the left Roman Emperor (and Pharaoh) Nero is presenting two sistrums, ritual musical instruments decorated with the head of Hathor. Before him stands the child god Ihy, son of Hathor and Horus. The relief is located on the (interior) eastern wall of the outer hypostyle hall of the Dendera temple and dates from the first century AD.”

Creation
The following, an image, from the Hathor Temple at Dendera, found in the crypt beneath its southern wall, shows "creation" of the universe: [2] 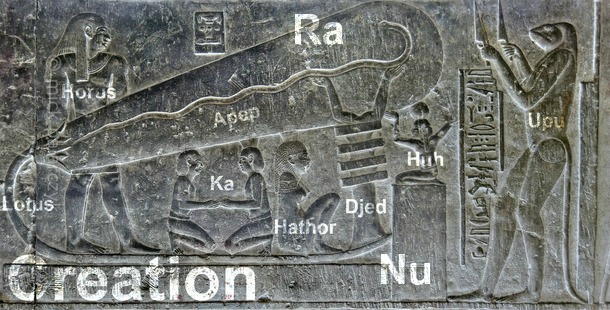 “The reliefs here portray human figures next to bulb-like objects reminiscent of oversized light bulbs. What we witness here is the creation of the cosmos, in the from of an elongated bulb. It springs from a lotus-flower on a boat, the lotus being the first object that floated on the primordial sea, according to Egyptian cosmology. From the flower also appears a snake [Apep], which is equated to the rising sun and the god Harsomptus [Horus] and which is enveloped by the cosmos. Harsomptus is also present in human form, standing behind the bulb. The top of the cosmos-bulb is supported by the God of Infinity, Heh [Huh] (see: Ogdoad), kneeling on a square base, while the sun-snake is supported by a Djed pillar with arms, symbol of stability and continuity. Sitting beneath the bulb are the goddess Hathor [Isis] (on the right) and, facing each other, two representations of the ka (living essence) of Harsomptus. Upu, the frog-headed baboon on the right holding two knives in his hands, is a protective genie. It is in this crypt below the southern wall that the golden statue of the ba (soul) of Hathor [Isis] (mother of Harsomptus) was kept. And it was probably here that the sacred [Khoiak festival] procession started on the eve of the first day of the New Year, bringing the statue of the goddess to the roof of the temple, just as the newly created sun rose from the abyss on the First Day. This part of the Dendera Temple was built during the later Ptolemaic period (first century BC).”