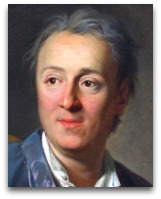 Chance, god, or nature?
In c.1745, Diderot, in his Philosophical Thoughts, juxtaposed chance, god, and nature as the three choices of operation of the universe, as follows:

“We do not know nature at all; causes hidden deep within her may have produced everything. Look in your turn at Trembley’s polyp! Does it not contain inside it the causes of its own regeneration? Why then would it be absurd to believe that there exist physical causes for which everything was made and to which the whole chain of this vast universe is so necessarily linked and subordinated that nothing that happens could not have happened; that it is our absolutely invincible ignorance of these causes that has made us look to a god, who is not even a being of reason, according to some? Thus, destroying chance does not mean proving the existence of a supreme being, for there may be something else which is neither chance nor god; I mean ‘nature’, the study of which can as a result only produce unbelievers, as is proved by the manner of thinking of all its most successful observers.”

Rameau’s Nephew
In 1762, Diderot, in his Rameau’s Nephew, published posthumously in German (1805) by Goethe (Ѻ), outlined, in dialogue form, supposedly, the problems posed by a Diderot-Holbach like atheistic morality and a Mettrie-like atheistic amorality, in the opening part of which he characterizes great geniuses as a juxtaposition between Caesar, Marcus Aurelius, Socrates, on one side, and Diogenes and Phryne the prostitute, on the other. [6]

Religion | Atheism
Some have attempted to labeled Diderot as “France’s first true atheist” (Ѻ); other’s classify him as an apatheist, i.e. one who is apathetic about theism/atheism distinction, based on his reply when being accused of being an atheist that he simply did not care whether god existed or not. (Ѻ) The following are other related quotes:

“If you want me to believe in god, you must make me touch him.”

— Denis Diderot (1749), portrayal of fictional conversation of Nicholas Saunderson with a priest, in Letters of the Blind (Ѻ)

“I believe in god, but I also live happily with atheists. It is very important not to mistake hemlock for parsley; but not at all so to believe or not in god.”

— Denis Diderot (c.1765), “Response to Voltaire” (Ѻ); note: in his Diderot-Barthelemy dialogue (1773), Diderot states that he said this "I believe in god" statement only to flatter Voltaire, and when on to state correctly that he was an "unbeliever". [4]

Sunand Joshi (2014) characterizes him as a "materialist who all but openly espoused atheism".

Animate atoms
Diderot had some type of "animate atom" theory, speculating, e.g., how possibly that when to people die (dereact) and are interred next to each other, their atoms might co-mingle in the future by some type of law of affinity. [2]

Encyclopedia
Diderot’s 1772 Encyclopedie, co-written with Jean D'Alembert, culminating as a 35-volume set, which contains an affinity table (attributed to Diderot), is said to mark “end of an area in which a single human being was able to comprehend the totality of knowledge” (see: "last persons to know everything").

Determinism
Diderot was an adherent to strict historical determinism, according to which it is nothing but external forces that make people behave as they do, in which consciousness was an experienced allusion. He conceived of a mathematician who gets up, works on geometry, writes and posts letters, and dines with his friends, and yet all the while, according to Diderot: [1]

“He knows nothing, but nothing of what he has done, and I see this man—machine pure and simple—experiencing different motives which have impelled it without having freed it; it has not produced a single expressly voluntary act.”

This is an example of the human machine model.

Quotes | On
The following are quotes on Diderot:

“Vartanian (Ѻ), as many critics do, believes that in 1746 Diderot truly was a deist: he prefaced the Philosophic Letters with ‘I write about god.’ Soon Spinozism (the notion that god and the universe are one and the same and that god does not exist outside the universe) replaced Diderot's deism. However, by 1749, La Mettrie's materialism convinced Diderot to embrace atheism. When Diderot sat down to write the Letter on the Blind in 1749, atheism had replaced Spinozism. Vartanian says that Diderot embraced ‘Nature capitalized . . . and endowed with several of the creative powers formerly reserved to god.’ Vartanian points out that La Mettrie, who in Man machine, published a year before the Letter on the Blind, declared: "Let us not limit the resources of nature; they are infinite’.”

Quotes | By
The following are noted quotes by Diderot:

“The philosopher has never killed any priests, whereas the priest has killed a great many philosophers.”

“Skepticism is the first step on the road to philosophy.”

“Man will never be free until the last king is strangled with the entrails of the last priest.”

“Pithy sentences are like sharp nails which force truth upon our memory.”

“There are things I can't force. I must adjust. There are times when the greatest change needed is a change of my viewpoint.”

“Only passions, great passions can elevate the soul to great things.”

“Lost in an immense forest during the night I only have a small light to guide me. An unknown man appears and says to me: ‘my friend, blow out your candle so you can better find your way.’ This unknown man is a theologian.”

Further reading
● Diderot, Denis. (1749). Letter on the Blind for the Use of Those Who Can See. Publisher; in: Blindness and Enlightenment (translator: Kate Tunstall) (§: Appendix One, pgs. 167-28). Bloomsbury, 2011.
● Stark, Sam. (2006). Diderot: French Philosopher and Father of the Encyclopedia. Rosen Publishing Group.