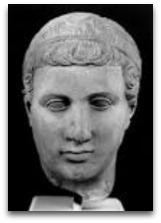 Overview
Diagoras is semi-labeled, by some, as the "first true atheist", followed by Theodorus; known as “Diagoras ‘the Atheist’ of Melos”, a disciple of Democritus (Ѻ), cited by Cicero, among others, sometimes referred to, in the history of atheism (Ѻ), as the “first atheist” or history's earliest known “confirmed atheist”, as some (Ѻ) describe him.

In 423BC, Aristophanes, in is comedy Clouds, lampooned Diagoras as an anti-religious contrarian. [2]

In 1697, Pierre Bayle, in his Historical and Critical Dictionary, penned the first serious attempt to present Diagoras as a person in article form. [1]

In 2016, Marek Winiarczky, in his Diagoras of Melos: a Contribution to the History of Atheism, argues that “cannot be considered to have been an atheist in the modern sense.” [1]

“With reason did the Athenians adjudge Diagoras guilty of atheism, in that he not only divulged the Orphic doctrine, and published the mysteries of Eleusis and of the Cabiri, and chopped up the wooden statue of Hercules to boil his turnips, but openly declared that there was no god at all.”

— Athenagoras (200AD), A Plea for the Christians

“Diagoras and Theodorus flatly deny that there were ever gods at all.”

“Diagoras, nicknamed ‘the atheist’, was the Hitchens of ancient Athens.”