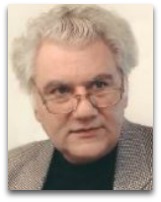 In existographies, Dimitris N. Keranis (1948-) (SNE:14) (CR:7) is a Greek lawyer and thermodynamic social theorist noted, in economic thermodynamics, for his 2005 human free energy theory of economics and human values.

Overview
In 2005, Keranis, in his "Human Values and the Second Law of Thermodynamics", published at Entropy-and-HumanValues.gr (Ѻ), argued that Gibb's function, of the following form:

The following is Keranis’ abstract to his essay:

The author initially applies a philosophical criterion, of spoken words and physical acts, to the categorization of human purposeful action on the basis of the distinct qualities of verbal expression, on the one hand, and human acts, on the other hand. He then identifies specific functions related to each of the three categories defined as loci of human social becoming:

(a) First category: speech that commands and acts that comply with it reflect nature's tendency to organize itself through the production of work. These acts are responsible for the flow of energy within the social system. All economic activity constitutes the core of this type of acts.
(b) Second category: speech acts-expressed as ontological or scientific and normative propositions.
(c) Third category: the unuttered acts of poetic and literary speech and of the fine arts; identified as unique expressions of an evolving humanity that translate into value flows within the social system.

When conceived as social dispersal structures, they reflect a natural tendency to diminish the intensity and to downgrade the capacity of energy to produce work. At the economic level, they reflect the tendency of the social system towards equilibrium, through the dispersal of wealth, income redistribution, decentralization of power etc. This linkage between flows of economic acts and value flows leads to an unexpected finding: The social system's production of work and entropy depends on two antithetically opposed factors: the flow of economic acts and the flow of values. We have here the same qualitative relationship expressed by Gibb's function (G=H-TS), in which energy and entropy are the two opposing forces in the production of work. From the perspective of economic analysis, the author claims that this relationship between the flow of economic acts and the flow of values is captured by Zolotas' function (1982), which relates economic growth to social welfare. He then asks: Is there a criterion (the author suggests the humanist criterion) for determining the optimum equilibrium of the social system? Is human society moving away from it? What are the resulting consequences and what can be done about it? This essay, in sum, places the reader at the critical point where the humanities meet the natural sciences.