In existographies, Diogenes of Oenoanda (c.77-142AD), aka "Diogenes of Oinoanda" (Ѻ) was a Greek Epicurean philosopher, noted for []

Overview
In c.127AD, Diogenes, in the Greek city (now Turkey) of Oenoanda (Ѻ), constructed a rectangular piazza (town square) surrounded by a portico, and furnished with statues, on two sides of which he inscribed (Ѻ) a lengthy account of Epicurean doctrines, that was 2.37 meters high, filling about 260 square meters of wall space, containing about 25,000 words, on physics, epistemology, and ethics; a reconstruction of which is shown below left, along with fallen blocks extant, below right:

About a quarter of the original Epicurean wall has survived; the following is a reconstruction of the wall and its contents: 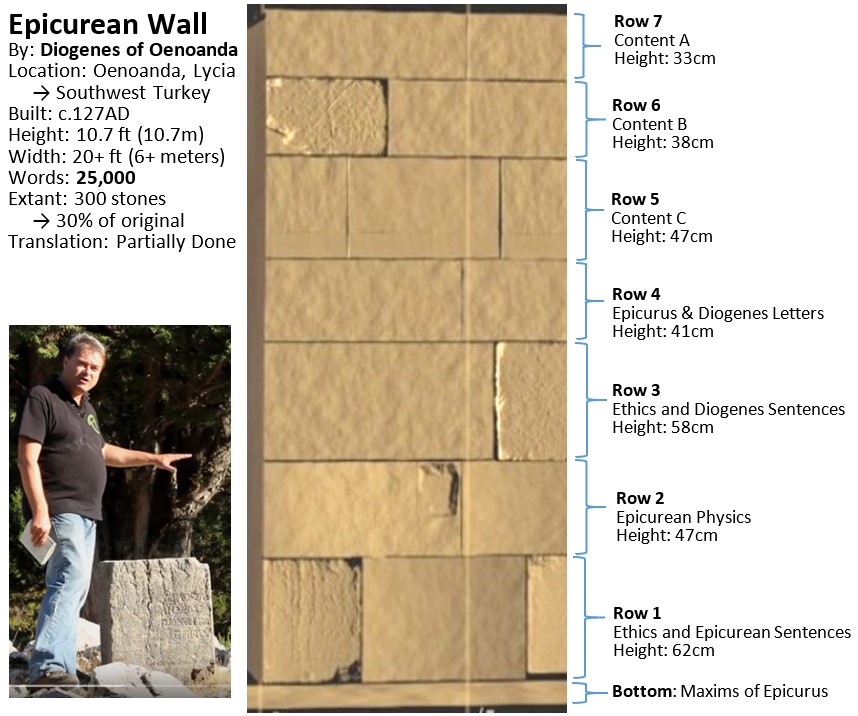 In 1892, 64 fragments (Ѻ) were first published; presently, some 300 fragments and or blocks, supposedly, have been discovered, with recovery ongoing. [2]

Quotes | By
The following are quotes by Diogenes of Oenoanda:

“For if anyone follows Democritus' theory, saying that the atoms have no free motion, since they collide with one another, from which it appears that the motion of everything is necessitated, we shall say to him 'Do you not know, whoever you are, that the atoms have a free motion, which Democritus did not discover, but Epicurus revealed, namely the motion of the swerve, as he shows from the phenomena?”

“Having already reached the sunset of my life (being almost on the verge of departure from the world on account of old age), I wanted, before being overtaken by death, to compose a fine anthem to celebrate the fullness of pleasure and so to help now those who are well-constituted. Now, if only one person or two or three or four or five or six or any larger number you choose, sir, provided that it is not very large, were in a bad predicament, I should address them individually and do all in my power to give them the best advice. But, as I have said before, the majority of people suffer from a common disease, as in a plague, with their false notions about things, and their number is increasing (for in mutual emulation they catch the disease from one another, like sheep) moreover, it is right to help also generations to come (for they too belong to us, though they are still unborn) and, besides, love of humanity prompts us to aid also the foreigners who come here. Now, since the remedies of the inscription reach a larger number of people, I wished to use this stoa to advertise publicly the medicines that bring salvation. These medicines we have put fully to the test; for we have dispelled the fears that grip us without justification, and, as for pains, those that are groundless we have completely excised, while those that are natural, we have reduced to an absolute minimum, making their magnitude minute.”