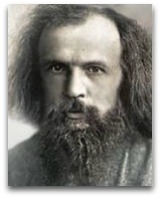 “I saw in a dream a table where all the elements fell into place as required. Awakening, I immediately wrote it down on a piece of paper.”


Of curiosity, this is similar to German chemist August Kekule’s famous 1865 dream about a snake circling around to bite its tale as the visualization of the structural model for Benzene. Mendeleyev's table that he wrote down, containing a total of 66 known (and some unknown) elements, is shown below:

Other
Mendeleev is also credited for scientific justification of the "optimal" ratio of alcohol of 40% (80 proof) used in Russian vodka. (Ѻ)

Table
The original version of Mendeleyev's table is shown adjacent.

Quotes | On
The following are related quotes about Mendeleyev:

“Mendeleev is dead”, looking at a personal signed photograph of the chemist, “Now where is his will? He was a very great man. His will has the greatest part of him. What has become of that will? I don’t know.”

“There exists everywhere a medium in things, determined by equilibrium.”

“It is the function of science to discover the existence of a general reign of order in nature and to find the causes governing this order. And this refers in equal measure to the relations of man - social and political - and to the entire universe as a whole.”

“The elements, if arranged according to their atomic weights, exhibit an apparent periodicity of properties.”

“We could live at the present day without a Plato, but a double number of Newtons is required to discover the secrets of nature, and to bring life into harmony with the laws of nature.”

“No law of nature, however general, has been established all at once; its recognition has always been preceded by many presentiments.”

“Certain characteristic properties of elements can be foretold from their atomic weights.”

“I have achieved an inner freedom.”

“The establishment of a law, moreover, does not take place when the first thought of it takes form, or even when its significance is recognized, but only when it has been confirmed by the results of the experiment.”