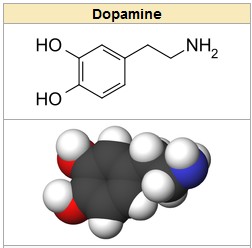 Overview
Dopamine, in colloquial speak, tends to be characterized as the "desire molecule" or neurotransmitter associated with desire: levels increase as passion levels increase; elevated levels are associated with romantic love.135 Is produced by specialized nerve cells located in the arcuate nucleus of the brain. Increased levels associated with sexual arousal and heightened motivation.136 Elevated levels directly associated with a preference for a particular mate.137 Mate favoritism is associated with a fifty percent increase in the nucleus accumbens, a part of the brain associated with craving and addiction.138 Reduced levels correlated to indiscriminate mate selection.139 Injected increases of cause females to prefer the male present at the time of the infusion, even if she had never mated with this individual.139 Levels spike as an estrus female looks at slides of a males face.140 Heightened levels associated with extremely focused attention.141 Heightened levels associated with unwavering motivation and goal-directed behaviors.142 All major addictions are associated with elevated levels of.143 Specific brain cells produce greater amounts when a reward is delayed, thus energizing, focusing, and driving the pursuer harder.144 All basic drives, and particularly sexual drive or motivation, are associated with elevated levels of.145 Stimulates the release of testosterone.146 Elevated levels are related to sexual arousal, frequency of intercourse, and positive sexual function.147 When injected into the blood stream it stimulates copulatory behaviors.148 When a male is near an estrous female, such that he can see or smell her, his levels rise.149 During copulation levels rise.150 Stimulates lust and erectile function.151 Drugs that elevate levels of in the brain cause sex drive to improve.152 Very high levels of are associated with intense motivation and goal-directed behaviors, as well as with anxiety and fear.133 Vigorous exercise drives up levels of dopamine in the nucleus accumbens, bestowing feelings of euphoria.153 Twice as many receptors for dopamine are found in the limbic systems of schizophrenics.154 Is responsible for the desire or pursuit of any pleasure [see: pleasure center]; without it, a person will feel no joy, anticipation, enthusiasm, excitement, or exuberance.128 It is the common denominator of most addictions, such as cocaine and alcohol, and may be with addicts people to each other.128 It is the neurotransmitter that moves people, drives them to go after what they want, reinforces that desire, and promotes the anticipation of pleasure.128 Is what makes a person smile as well as induces spontaneous activity and movement.128 (ref #s per [1])

Counters
People who have a tendency to count things, such as books, stair steps, or flower petals, according to Helen Fisher, who asks people this question in her Chemistry.com type matching questionnaire, tend to have higher levels of dopamine. [5]

“I want ten chocolate chip cookies. Medium chips. None too close to the outside.”

Risk tolerance and morality
A person’s thinking on moral issues is said to vary depending on one’s tolerance for risk; a factor which is, in turn, governed by a variety of genes, including genes for the D4 dopamine receptor and the protein stathmin, the latter of which is primary expressed in the amygdala. [2]

Religion vs. science
People who have inherited the most active form of the D4 receptor are more likely to believe in miracles and to be skeptical of science; whereas, conversely, those with the least active forms correlate with “rational materialism.” (materialism) [3]

Studies show that skeptics given the drug L-dopa, which increases dopamine levels, show an increased propensity to accept mystical explanations for novel phenomena. [4]