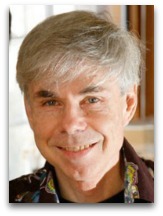 In existographies, Douglas Hofstadter (1945-) is an American mathematical physicist turned ontic opening stylized “sense of self” philosopher, noted for []

In 2007, Hofstadter, in his I am a Strange Loop, having been mesmerized by video feedback experiments he did in graduate school, along with Godel's theorem, with its formulas that speak of themselves, Escher's drawings of hands drawing hands, Bach's involuted fugues, attempted to stylize the “I” of a person in terms of “loopiness” as follows: [1]

"You make decisions, take actions, affect the world, receive feedback from the world, incorporate it into yourself, then the updated ‘you’ makes more decisions, and so forth, round and round; [what results is an] anatomically invisible, terribly murky thing called I.”

Hofstadter then attempts to argue that each thing’s looped structure is its “self” or “soul”, terms he, supposedly, uses interchangeably in his mind. [1]
Here, to note, there is something to be said about how existence involves “loops”, but rather it operates in the form of orbitals (see: human molecular orbital theory; turning tendencies) and atomic turnover (see: turnover rate), generally captured by how human existence, according to Charles Sherrington (1938), is an “eddy in the stream of energy, destined by the second law of thermodynamics.

When, however, the specifics of Hofstadter's looped soul-self theory are elaborated on, e.g. in comparing the soul or loop of a fly, to a lion, to a dog, to a human, a cartoonish anthropomorphism results; to site on example: [2]

“This may merely be a lexical gap or a confusing semantic blur in these languages (the meaning on a literal level is "co-knowledge"), but even if that's the case, I nonetheless think of it as offering us an insight that might otherwise never occur to us: that the partial internalization of other creatures' interiority (conscience) is what most clearly marks off creatures who have large souls (much consciousness) from creatures that have small souls, and from yet others that have none or next to none. I think it's obvious, or nearly so, that mosquitoes have no conscience and likewise no consciousness, hence nothing meriting the word "soul". These flying, buzzing, blood-sucking automata are more like miniature heat-seeking missiles than like soulful beings. Can you imagine a mosquito experiencing mercy or pity or friendship? 'Nough said.”

On this sloppy basis, e.g. using derogation stylized language to argue that flies, in the unwritten context of the great chain of being, are soul-less automatons without friends while humans are soulful non-automatons with friends, Hofstadter suggests, based on the fact that James Huneker once wrote that a certain Chopin etude should not be attempted by “small-souled men”, that each thing in the universe, albeit only animate things above the size of a mosquito, should be assigned a “Huneker number” (Ѻ)(Ѻ)(Ѻ), with mosquito being about 0.5, average human being 100, and Mahatma Gandhi being 200. [1]

Self
The following is a popular quote by Hofstadter on his views of what he is:

“In the end, we are self-perceiving, self-inventing, locked-in mirages that are little miracles of self-reference.”

Here, Hofstadter, despite studying physics, is unaware that things which move themselves (see: self-motion), e.g. a thing that "invents" itself, as pointed out by Leonardo da Vinci and Karl Pearson, are violations of the principle of inertia and the first law of motion.