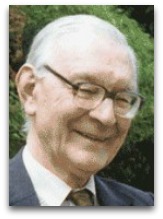 In hmolscience, Douglas C. Spanner (c.1920-) is an English biophysicist noted for his 1973 to 2004 efforts to give a middle ground digression on the choice between evolution theory meaning and Biblical meaning, in respect to questions like "who am I?" and "how did I get here?"

Overview
In 1964, Spanner, in his An Introduction to Thermodynamics: Experimental Botany, modeled a leaf as a heat engine, attempts to outline the criterion for spontaneity and thermodynamics in living systems, and of note includes an interesting section on the the graphical nature of the a total differential . [1]

In 1973, Spanner, being a life long reader of the Bible, as he says, was ordained to the non-stipendiary ministry of the Church of England.

In 1987, Spanner, in his Biblical Creation and the Theory of Evolution, stated that he considers his viewpoint a neutral stance between science and religion. [3]

In 2004, Spanner, in his online Creation and Evolution, which is sparse with reference to the second law, summarized his Christian-sided view, and took issue with the anti-theistic views of Richard Dawkins, Peter Atkins, and Daniel Dennett; the following of which seems to be his abstract: [4]

“Two of the most important and serious questions people ever ask are surely, ‘Who or what am I?’ and, ‘How did I come to be here, on earth?’ In adulthood they tend to become snuffed‑out by the pressures of everyday life; and for many, life ends at last like a tale which is told, with a sigh, and without any satisfactory answer having ever been found. Two sources which claim to give us such an answer are the Judaeo‑Christian Scriptures, and evolutionary science; in other words, the Bible and the experts in Darwinism. The latter currently get very good publicity through the highly exciting and confident writings of biologists like Richard Dawkins and philosophers like Daniel Dennett, backed‑up as they often are by secular cosmologists and the authors of science fiction. The answers they give invoke many ideas outside the stock‑in‑trade of the ordinary man or woman, and are usually at a specialist level above their ability to challenge; the listener is accordingly left with conclusions only half‑believed because he is out of his depth and because they often run counter to deep intuitions.”

Spanner argues, for instance, that passages from the Genesis sections of the Bible “fills the cosmic horizon with hope”, “in spite of the second law of thermodynamics [which] predicts an ultimate heat death of the universe.” [4]

Education
Spanner completed his undergraduate work in chemistry at Imperial College, London. He completed his PhD in 1951 in biology and a DSc in 1972. [2] He was the chair of the department of plant biophysics at the University of London, retiring from that position in 1978.