In hmolscience, the Dunbar number is 150 and represents the maximal number at which a social group, such as a small tribe, small company, thematically-bound communities, e.g. Hutterites, Amish, Mennonites, military units, etc., can remain stable solely via interpersonal peer view and community incentives. [1] The following is a representative Dunbar number diagram: [2] 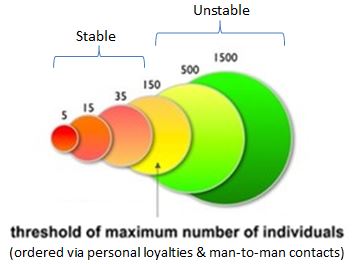 In short, once group size grows beyond 150, a documented legal system is needed to maintain aggregation.

Overview
The Dunbar number is concisely defined as the cognitive limit to the number of individuals with whom any one person can maintain stable relationships. The term was proposed in 1992 by British anthropologist Robin Dunbar. [3] At or below the number 150, according to Dunbar:

“Orders can be implemented and unruly behavior controlled on the basis of personal loyalties and direct main-to-man contacts. With larger groups, this is impossible.”

To arrive at this number, Dunbar supposedly derived a generalized formula for any given species in which the input is the neocortex ratio (or the neocortex-to-brain size ratio), and the output is maximal size at which a group may retain stability. [5]

It has been discovered, via observation, that when a social group grows beyond the Dunbar number, it will naturally split apart into two smaller factions, where-after each molecular entity begins to grow in size, and each group tends towards a new Dunbar number. The phenomenon seems to have something to do with stability in connection with the surface law for groupings, or systems of human molecules in combination with the Muller stability ratio. The conception of the Dunbar number is one of the prime theoretical supports of Malcolm Gladwell’s 2000 tipping point theory. [5]

It has been argued that, according to genetic evidence, a Dunbar size band of humans left Africa some 50,000 years ago, and that all modern humans are descended from this small, stable group of African hominids.