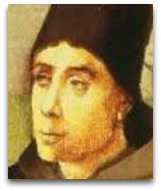 Overview
Scotus is oft-grouped with: Thomas Aquinas, William of Ockham (who he influenced), and Francisco Suarez as top four middle ages philosopher theologians.

Quotes | On
The following are quotes on Scotus:

“Read Duns Scotus’s Ordinatio of the Oxford Lectures (see the Critical Edition by Peter Simpson). Not the easiest of the medieval philosophers — I like to call him the ‘medieval Kant’ — this thinker is worth the time of a patient reader. A great synthesizer of positions, he sought a middle ground in the prevailing medieval disputes.”

Quotes | By
The following are quotes by Scotus:

“If all men by nature desire to know, then they desire most of all the greatest knowledge of science. And he immediately indicates what the greatest science is, namely the science which is about those things that are most knowable.”

References
1. Anar, Ben. (2019). “A How-To-Guide, for Non-academic Philosophy Readers, to actually read the Primary Works of 45 Western Philosophers, With the Essential Order” (Ѻ), Medium, May 3.

Further reading
● Scotus, Duns. (1997). Duns Scotus on the Will and Morality. CUA Press.