In famous publications, Ecological Stoichiometry: the Biology of the Elements from Molecules to the Biosphere, is a 2002 book, by American limnologists Robert Sterner and James Elser, noted for being the first publication to contain the results of the first-ever calculation for the empirical molecular formula for one average human being, a calculation done, independently, the following year by American chemical engineer Libb Thims. [1] In outlining their subject, Sterner and Elser state:

“The stoichiometric approach considers whole organisms as if they were single abstract molecules.”

They were led to this by studying differences in carbon, nitrogen, and phosphorous levels in similar species. In their chapter one, as to the human being, they state that “from the information on the quantities of individual elements, we can calculate the stoichiometric formula for a living human being to be”, taking cobalt (Co) as unity: [11]

Calculation history
The term “human molecule”, used to describe a human being as an abstract molecule, dates back to 1869 in the works of French philosopher Hippolyte Taine. The use of this construct has since been discussed by dozens of thinks over the years in various fields, ranging from philosophy, to history, to economics. The subject of human thermodynamics, in fact, was defined, in 1952 by English physicist C.G. Darwin, as thermodynamic study of systems of human molecules.

Not until the turn of the 21st century, however, a period following the appearance of various human mass composition tables, was the calculation for the molecular formula for the human being done. Two different, independent, calculations were done, one on April 18, 2000 by Sterner and Elser, who determined the human being to be an 22-element molecule, using cobalt element found in the lowest amount in the average human, and one in September 2002 by Thims, who determined the human being to be an average 26-element molecule, taking vanadium as unity. [2]

Key sections:
The following are screenshots of the opening section of the book devoted to the 'human molecules' from the stoichiometric perspective: 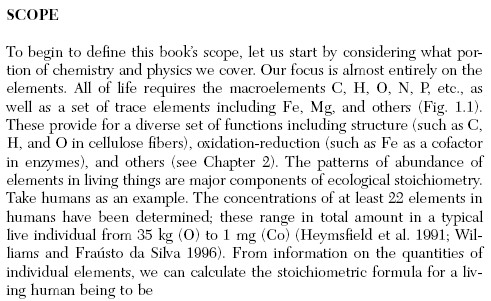 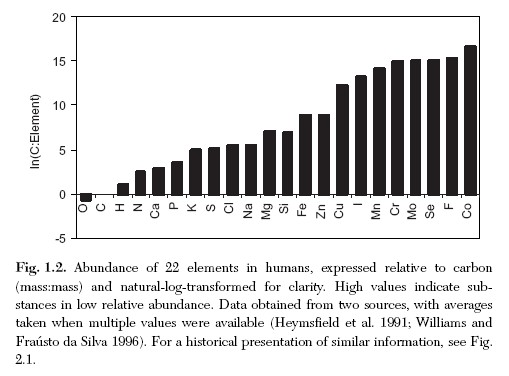 References
1. Sterner, Robert W. and Elser, James J. (2002). Ecological Stoichiometry: the Biology of Elements from Molecules to the Biosphere (PDF) (chapter one) (human molecule, empirical formula pg. 3; discussion, pgs. 47, 135). Princeton University Press.
2. (a) Thims, Libb. (2002). Human Thermodynamics (Volume One), Date: Sept. Chicago: Institute of Human Thermodynamics.
(b) Note: Thims only became aware of Sterner's calculation on February 17, 2008 after doing a Google book search on keywords "human molecule thermodynamics"; Thims then emailed Sterner within the hour.
(c) Source for Sterner date: "I have attached the spreadsheet used to construct that formula for a human molecule in our book. My copy of the spreadsheet is dated April 18, 2000. I cannot say exactly when we made the calculations. That date might have to do with some modification of the figure or some other edit. At any rate, it gives an indication." (email communicate from Robert Sterner to Libb Thims on February 20, 2008).