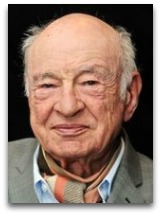 In hmolscience, Edgar Morin (1921-) is a French philosopher noted, in sociological thermodynamics, for being a Prigogine disciple who who in the 1970s outlined a melting pot theory of sociology, using complexity theory, second law, entropy, disorder and organization, cybernetics, among others.

Overview
In 1977, Morin, in his The Nature of Nature, used complex systems theory to theorize about philosophy of mind and epistemology.

Morin, according to Luis Fernández-Galiano, is one of "Prigogine's disciples". [1]

Morin, supposedly, describes the views of those as Harold Blum and Jeremy Rifkin as something extracted from the "thermodynamic vulgate". [1] The following is a representative quote of Morin’s general view: [2]

“There is, in time, and always will be, a dimension of degradation and dispersion. No organized thing, no organized being can escape degradation, disorganization, dispersion. No living thing can escape death. Perfumes evaporate, wines sour, mountains flatten, flowers wither, living things and suns return to dust. All creation, all generation, all development, and even all information must be paid for in entropy. No system, no being can regenerate itself in isolation.”

Morin, known as the “sociologist of complexity theory”, has argued, particularly in his 1981 work, that organization emerges out of disorder, and that the principle of organization works in direct opposition to entropy, in such a way that organization constantly absorbs more and more energy, in order to become more dense, dynamic and productive. [3]