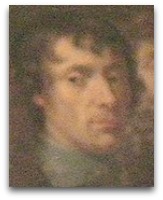 In existographies, Edme Mariotte (1620-1684) (CR:14) was a French physicist noted for his 1673 elastic and inelastic experiments, cited later by Gottfried Leibniz, and for his 1679 The Nature of Air, wherein he reports on research that is said to have recognized Boyle’s law (1669), in the statement that ‘the volume of a gas varies inversely as the pressure’ (see: Mariotte’s law); and for at some point conducted an early version of the ball and clay experiment.

In 1670, Mariotte had announced his intention to compose a major work on the impact of bodies, i.e. to conduct a number of experiments in order to discern possible laws of inelastic collisions; a modified extension, as seems to be the case of Rene Descartes earlier 1610s work on elastic collisions (of hard bodies), supposedly.

In 1671, Mariotte completed his experiments on collisions, which he read Paris Academy of Science.

In 1673, Mariotte, in his Treatise on the Percussion or Impact of Bodies, gave the first comprehensive treatment of the laws of inelastic and elastic impact and of their application to various physical problems.

Mariotte, in his Treatise, reported, firstly, on how he performed experiments using inelastic clay bobs, of varying sizes, some on pendulums, to confirm a series of propositions, most of which he termed “principles of experience”, namely: [2]

(a) the additivity of motion (both directly and obliquely)
(b) the dependence of impact only on the relative velocity of the bodies (confirmed by the extent of flattening on impact)
(c) the quantity of motion (weight times speed) as the effective parameter of impact (also measured by flattening)
(d) the laws of inelastic collision linking initial and final speeds through the conservation of quantity of motion.

First, using simple pendulums with soft clay bobs—clay being an “inelastic” body, as contrasted with an “elastic” body, i.e. capable of recovering size and shape after deformation; wherein total kinetic energy during collision, between such bodies, remains unchanged—he measured the impact when the clay bobs collided by the extent of the flattening of the clay. With this data, he set up some laws of inelastic collisions.

He then linked these with the laws governing elastic collisions via the principle that a perfectly elastic body deformed by the impact of a hard inelastic one regains its original shape and, in doing so, imparts to the impacting body its original speed.

Mariotte then, supposedly, confirmed this new elastic-inelastic collision law, by bouncing a hard pendulum bob off a stretched string, and thereby showing something to the effect that apparently hard bodies deform on impact.

He did this, supposedly, by dropping glass and ivory balls from varying heights on to a steel anvil lightly coated with dust; the circles in the dust of various sizes enable him, he claimed to measure the degree of flattening of the balls.

Mariotte’s impact treatise long served as the standard work on the subject and went through three editions in Mariotte’s lifetime. [2]

In 1679, Mariotte, in his Discourse on the Nature of Air (Discours de la nature de l’air), was the first to call the finding that pressure is inversely proportional to volume, a ‘law of nature’. [4] The following are some takes on this:

“Towneley was the person who first suggested [what is now called] ‘Boyle's law’. Boyle, however, is generally credited with the discovery that the pressure exerted by a gas is inversely proportional to the volume of the space in which it is confined. From Boyle’s point of view, that discovery by itself was insignificant, and though he had provided the experimental evidence for it, he readily admitted that he had not found any general quantitative relation between pressure and volume before Richard Towneley suggested his simple hypothesis. Hooke also provided further experimental confirmation of the hypothesis. This ‘hypothesis’ was long known, on the continent, as ‘Mariotte’s law’, because Edme Mariotte, proposed it in his Essay on the Nature of the Air (1679. There are good reasons (James, 1928/1929) for believing that Mariotte was familiar with Boyle’s work [see: Spring of the Air (1660)] even though he does not mention it, so that he does not even deserve the credit for independent, much less simultaneous, discovery.”

“In his De la nature de l’air (1679), Edme Mariotte, through a combination of experiment, namely to ascertain the thickness of the lowermost 'layer' of the atmosphere, simplifying assumptions, namely about the average thickness of an atmospheric Iayer depending on its altitude and the total number of such layers, and calculation, namely to determine the relationship between atmospheric pressure, and hence barometer readings, and elevation, had concluded that atmospheric pressure decreased arithmetically as elevation increases geometrically, which Mariotte himself could compute only by approximating the geometric progression with an arithmetic one. Mariotte and others referred to this relationship as a ‘rule’; he employed the same term ‘regle de la nature’ (rule of nature), for what came to be known as the Boyle-Mariotte law relating the pressure, temperature, and volume of air, published in the same work. So, for example, Maraldi (1709) reported on how his experiments in tropical Batavia on the dilation of the air in a thermometer seemed to deviate from the ‘rule of Mariotte’.”

Mariotte, according to some reports (Ѻ), is said, in this work, to have confirmed Boyle’s law that pressure and volume vary inversely, but with the more detailed point that this only holds if the temperature is constant.

Heat
Mariotte, at some point, discovered that a sheet of glass cuts off the heat from a fire but has little effect on the heat from the sun. [3]

Other
Mariotte was a correspondent of Christiaan Huygens. [2]

Notes
The photo shown (Ѻ) is tentative photo of Mariotte from a circa 1866 Paris Academy of Sciences group photo. Mariotte’s date of birth and location, supposedly, are also unknown; the 1620 date possibly misattribution and or estimate. [2]

“The new, best proven theories make little progress as long as they are based only on abstract principles; even the best minds, who are used to certain acquired in youth abstract ideas, reject all the ideas that do not easily combine with the former, and all speculative truths, for which one can give no sensible evidence, are therefore absolutely lost. Therefore, when a man of genius proposing new truths, he has just like him supporters and a number of young people who are educated away the prejudices of the public schools; the rest did not understand him or wrong, pursuing him or makes him ridiculous.”

— Condorcet (1773), "Praise of Mariotte"; cited by Ludwig Feuerbach in his 1850 “The Natural Sciences and the Revolution”