Overview
In 1654, Somerset penned his Century of the Names and Scantlings of the Inventions, aka The Century of Inventions; which was not published until 1663. [10]

In c.1658, Somerset observed the cover of his cooking vessel explode, pop off, or shoot up, which led him to ruminate on the potential power of steam; the following is one account of this:

“It is said that the Marquis, while confined in the Tower of London, was preparing some food in his apartment, and the cover of the vessel, having been closely. fitted, was, by the expansion of the steam, suddenly forced off and driven up the chimney. This circumstance attracting his attention, led him to a train of thought, which terminated in the completion of his water-commanding engine.”

This anecdotal lid-poping story, to note, has been attributed, in various form, to Denis Papin and James Watt.

In 1660, Somerset obtained a patient, from the king, for his so-named "water-commanding engine" invention. [8]
In 1663, Somerset, in his The Century of Inventions, detailing more than 100 inventions, number 68 (LXVIII) of which was a fire driving water raising devise, which he describes as follows: [1]

“An admirable and most forcible way to drive up water by fire, not by drawing it or sucking it upwards, for that must be, as the philosopher calleth it, 'within the sphere of activity' [intra sphaeram activitatis], which is but at such a distance. But this way hath no bounder, if the vessels be strong enough: for I have taken a piece of a whole cannon, whereof the end was burst, and filled it three-quarters full of water, stopping and screwing up the broken end, and also the touch-hole, and making a constant fire under it, within twenty-four hours it burst, and made a great crack; so that having a way to make my vessels so that they are strengthened by the force within them, and the one to fill after the other, I have seen the water run like a constant fountain-stream forty feet high; one vessel of water rarefied by fire [hot body], driveth up forty of cold water. And a man that tends the work is but to turn two cocks, that one vessel of water being consumed, another begins to force and refill with cold water, and so successively the fire being tended and kept constant, which the self-same person may likewise abundantly perform in the interim between the necessity of turning the said cocks.”

The following is a reconstruction of the Somerset water raising engine based on his verbal descriptions and the grooves the wall of the citadel of Raglan Castle (Ѻ) , where he had one installed; the left device operating such that steam is generated in the boiler a, and thence is led into the vessel e, already nearly filled with water, and fitted up like the apparatus of de Caus (1615). It drives the water in a jet out through the pipe f. The vessel e is then shut off from the boiler a, is again filled through the pipe h, and the operation is repeated: [7] 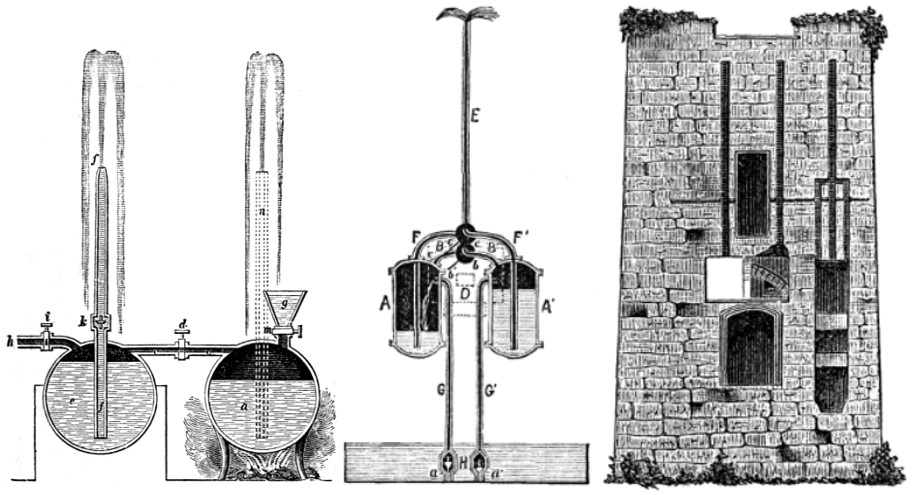 The following is Somerset’s definition of his water commanding engine, made for a water company then about to be established: [8]

“A stupendous, or a water-commanding engine, boundless for height, or quantity, requiring no external, nor even additional help or force to be set, or continued in motion, but what intrinsically is afforded from its own operation, nor yet the twentieth part thereof. And the engine consisteth of the following particulars:

1. A perfect counterpoise, for what quantity soever of water.
2. A perfect countervail, for what height soever it is to be brought unto.
3. A primum mobile, commanding both height and quantity, regulator-wise.
4. A vicegerent or countervail, supplying the place, and performing the full force of man, wind, beast, or mill.
5. A helm or stern, with bit and reins, wherewith any child may guide, order, and control the whole operation.
6. A particular magazine for water, according to the intended quantity, or height of water.
7. An aqueduct, capable of any intended quantity or height of water.
8. A place for the original fountain or river to run into, and naturally of its own accord incorporate itself with the rising water, and at the very bottom of the aqueduct, though never so big or high.

The following is another retrospect reconstruction of this so-called "Worcester engine" (Thurston, 1878) or "Somerset engine" description, in a guesstimate sense of the manner, if such a machine actually existed: [2] 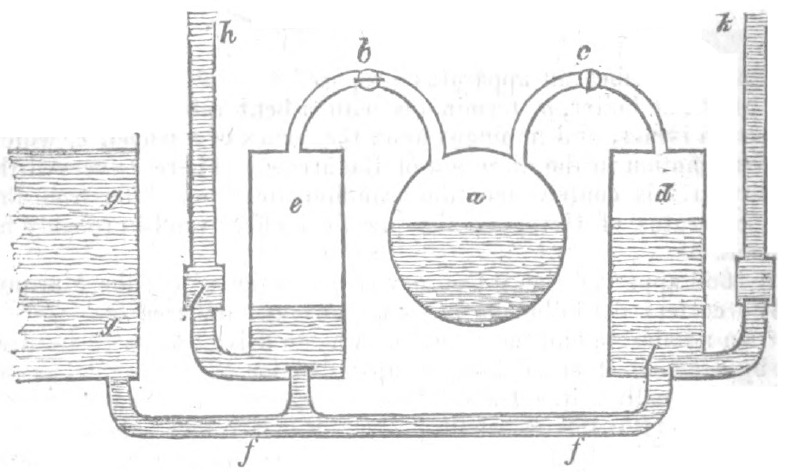 The operation of the device, referred to as a "water commanding engine", is described as follows:

“Let a represent the boiler communicating by the pipes b and c, with the cold water vessels d and e, which latter communicate by the pipe f, f, with the water to he raised, g, g. The pipes hand k ascend to the reservoir, forty feet above, and their lower ends enter the cold water vessels e and d. The two cocks, b and c, are those which are described to be opened and shut alternately. The four valves in the pipes f, h, and k, are precisely such as had been used for nearly two thousand years in pumps. The vessels d and e are in fact forcing pumps, in which steam is substituted for a solid piston. The cοck b is in the diagram open, the steam is therefore forcing the water out of e, and up the pipe h. The cοck c is closed, and the vessel d is cooling; the water tends, therefore, to enter it both from the cistern g, g, and from the pipe k; the arrangement of the valves, exactly like those of a pump, prevents the latter and permits the former: therefore, the vessel d, as it cools, is filled from the cistern g, g. This action would, no doubt, go on alternately, by maintaining the fire, and alternately opening and shutting the cocks b, c, and it is quite certain that this proposal more nearly resembles the first steam engine known to have been made, than any prior invention.”

The engine, described as “an admirable and most forcible way to drive up water by fire”, purportedly could raise cold water to a height of 40 feet.

Somerset's devise has been supposed to have been a variant of Giovanni Porta’s 1606 device.

Savery
In 1819, Abraham Rees, in his “Steam-Engine” article, recounted various historical anecdotes on the conjecture that Thomas Savery, in building his “Savery engine” (1698) aka Miner’s friend, got the idea from Somerset, but that Savery denied this assertion. [3]

“A practical mathematician, who has quickness to seize a hint, and sagacity to apply it, might avail himself greatly of these scantlings. It is extremely probable, that Savery took from the Marquis the hint of the Steam engine, for raising water with a power made by fire, which invention alone would entitle the author to immortality.”

In 1878, Robert Thurston, in his A History of the Growth of the Steam Engine, likewise, was saying that the Somerset engine was almost substantially and precisely the form of the Savery engine. [7]

Most of this presumed connection between Savery and Somerset, however, supposedly, has debunked. [4]

Quotes | On
The following are quotes on Somerset:

“One man, by the help of this machine, raised four large buckets full of water in an instant, forty feet high, and that through a pipe of about eight inches long.”

“A hot-air engine, however, which is the subject of Hero's 37th proposition, is of real interest. Hero sketches and describes a method of opening temple-doors by the action of fire on an altar, which is an ingenious device, and contains all the elements of the machine of the Marquis of Worcester, which is generally considered the first real steam-engine, with the single and vital defect that the expanding fluid is air instead of steam.”

“The most notable of Worcester's devices, and that on which his claim as inventor of the steam engine rests, is his ‘water-commanding engine.’ Before the civil war he made experiments in this direction on the walls of Raglan Castle, but the traces that still remain (see engraving in Dircks, p. 21) are insufficient to ‘point distinctly to precise particulars of arrangement.’ The experiments were, however, renewed at Vauxhall, and there in 1663 Samuel Sorbière saw and described the ‘hydraulic machine which the Marquis of Worcester has invented.’ It was designed for purposes of irrigation, and would ‘raise to the height of forty feet, by the strength of one man and in the space of one minute of time, four large buckets of water.’ Cosmo de' Medici, duke of Tuscany, visited it in 1669, when a similar description was given (Dircks, pp. 264, 302). Robert Hooke [q. v.], however, described it as ‘one of the perpetual motion fallacies.’ This is apparently the machine described in the ‘Century,’ No. 100, and in Addit. MS. 23115, f. 45, as ‘a most admirable and stupendious invention.’ Worcester set great store by it, and in 1663 obtained a monopoly of its profits by act of parliament, granting one tenth to the king. In the same year he issued a folio broadside (reprinted in 1858) containing a description of the engine, the act of parliament, and some verses. He hoped by its means to pay off his debts, and the machine was actually working for seven years. Nothing, however, is really known of Worcester's ‘water-commanding engine’ beyond his own ‘vague and somewhat bombastic description (Mr. R. B. Prosser in Engineer, 19 May 1876). Henry Dircks [q. v.] spent much time and money in the endeavour to ascertain the precise mode of construction, and search was even made in the marquis's grave for a model which was said to have been buried there, but without result (ib.) There is, moreover, no mention of either steam or fire in the act of parliament or any of the descriptions, and Worcester's claim as inventor of the steam-engine rests upon the assumption that this machine is identical with that suggested in the ‘Century,’ No. 68, where an admirable and most forcible instrument of propulsion is described, and is credited with the power of ‘driving up water by fire.’ The idea is said to have occurred to him while watching in the Tower the lid of a saucepan rising from the pressure of steam from boiling water; but the supposed identity of the two ‘inventions’ is ‘pure and unwarranted hypothesis’ (Galloway, The Steam-Engine and its Inventors, 1881, p. 57), and there is no conclusive evidence to prove that Worcester ever constructed a steam-engine like that suggested in No. 68 of his ‘Century.’”