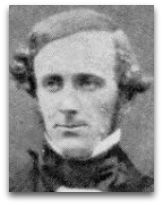 In existographies, Edward Frankland (1825-1899) (GCE:#) (CR:10) was an English chemist noted for his 1852 valence theory, a pioneering idea in the history of chemical bonding theory, in which he combined the older theories of ‘free radicals’ and ‘type theory’ with thoughts on chemical affinity, he argued that atoms of each elementary substance have a definite saturation capacity or ‘combining power’, so that they can only combine with a certain limited number of the atoms of other elements. [1]

Valence theory
In his valence theory of atomic attachment, Frankland explained that certain elements have the tendency to combine with other elements to form compounds containing three, i.e. in the three atom groups (e.g. NO3, NH3, NI3, etc.) or five, i.e. in the five atom groups (e.g. NO5, NH4O, PO5, etc.), equivalents of the attached elements. It is in this manner, according to Frankland, that their affinities are best satisfied. As he stated:

“A tendency or law prevails (here), and that, no matter what the characters of the uniting atoms may be, the combining power of the attracting element, if I may be allowed the term, is always satisfied by the same number of these atoms.”