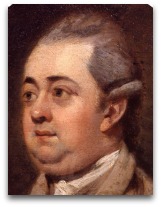 See: Rise and fall of civilization

In 1788, Gibbon finished his six-volume The History of the Decline and Fall of the Roman Empire, some of which he had peer reviewed by David Hume (1776), wherein he openly criticized organized religion; quote: “Religion is regarded by the common people as true, by the wise as false, and by the rulers as useful” (Ѻ); and or a paraphrase of Seneca the Younger (Ѻ), thereafter developing enlarged reputation for harboring “irreligion” or atheism. (Ѻ)

Specifically, Gibbon told the story of the rise and fall of Roman, without the intervention of god, as was previously the standing explanation, but instead from the point of view of Rome’s decline as due the “disease of Christianity” spreading through the Roman empire and rotting it. [1]

Influence
Gibbon’s six-volume The History of the Decline and Fall of the Roman was influential to Isaac Asimov’s seven-volume science fiction Foundation Series (1993), wherein psychohistory is outlined.

Quotes | By
The following are quotes by Gibbon:

“The various modes of worship, which prevailed in the Roman world, were all considered by the people, as equally true; by the philosopher, as equally false; and by the magistrate, as equally useful.”

“The number of Protestants executed in a single province and single reign far exceeds that of the primitive martyrs in the space of three centuries of the Roman empire.”

“Unprovided with original learning, unformed in the habits of thinking, unskilled in the arts of composition, I resolved-to write a book.”

Further reading
● Gibbon, Edward. (1883). History of Christianity: Comprising All that Relates to the Progress of the Christian Religion in "The History of the Decline and Fall of the Roman Empire," and A Vindication of Some Passages in the 15th and 16th Chapters (Serapis, pgs. 526-27). P. Eckler.