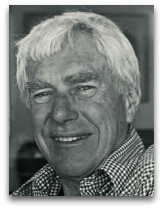 In existographies, Edward Hall (1914-2009) (CR:11) was an American anthropologist noted for his 1966 The Hidden Dimension: an Anthropologist Examines Man’s Use of Space in Public in Private, wherein he extends the 1955 animal personal space, flight or fight, trigger reaction, and territorial measurement work of German zoologist Heini Hediger, to develop theories on human social volumes.

Action chain | Chain reaction
In 1966, Hall, in his The Hidden Dimension, used the term “chain reaction”, and or, supposedly, “action chain”, as a type of automated reaction sequence of events or “dance”, in the case of two-person action chain; noting that the common goal could be reached only after each link in the chain was forged. Hall gave the example of the fifteen ordered steps required in the matting of the sticklebacks. He then argued that humans, similarly, do nothing that is not part of an action chain. [8]

“As more and more is learned about both men and animals, it becomes clear that the skin itself is a very unsatisfactory boundary or measuring point for crowding. Like molecules that make up all matter, living things move and therefore require more or less fixed amounts of space (see: social space). Absolute zero, the bottom of the scale, is reached when people are so compressed that movement is no longer possible. Above this point, the containers in which man finds himself either allow him to move about freely or else cause him to jostle, push, and shove. How he responds to this jostling, and hence to the enclosed space, depends on how he feels about being touched by strangers.”

Here, interestingly, he compares people to molecules and notes frankly that "skin" is not a good boundary measurement for humans, which is good rule of thumb guideline for beginner human thermodynamicists in respect to discernment of "boundaries" in human social thermodynamic terms.

Social gravity
The following is another noted quote by Hall: [5]

In equation form, Hall seems to be giving the following estimate of the measure of the force between humans and animals or what seems to be social gravity:

where GS is the social gravity, d is the distance between the two people or animals, and n is a number between 2 and 3. Hall explains this logic in terms of his "invisible bubbles" theory and compressed social stress:

“If one sees man surrounded by a series of invisible bubbles which have measurable dimensions, architecture can be seen in a new light. It is then possible to conceive that people can be cramped by the spaces in which they have to live and work. They may find themselves forced into behavior, relationships, or emotional outlets that are overly stressful. When stress increases, sensitivity to crowding rises—people get more on edge—so that more and more space is required as less and less is available.”

The adjacent numbers give some example calculation of what Hall is saying here. In other words, if for example you get in someone's face, at a distance of 0.5 meters, the force may increase at a rate proportional to the inverse cube (8 newtons of force) of the distance rather than the inverse square (4 newtons of force) of the distance, according to Hall's intuitive estimates.

To give a comparison example, magnetic field strength is often described as diminishing inversely proportional to the square of the distance; but one will often hear descriptions that the field strength is inversely proportional to the cube of the distance from the surface of the magnet. It depends on the source of the field and how close you are to it.

. Magnetic monopoles don't actually exist as far as we know to date, but some situations can produce a field which is approximately a monopole field over a limited region. For example, if you have a long bar magnet and you stay close to one pole.

. This is what you get from a current loop or a bar magnet, when you get far enough away that it appears "small."

Norway rat study
Hall, in his chapter three "Crowding and Social Behavior in Animals", gives a rather cogent analysis of American ethologist John Calhoun's famous Norway rat study, conducted over a period of 14-years in and about a barn, with an overhead glass walkway observation platform, in Rockville, Maryland, from 1947 to 1958, commenting for example how Callhoun discerned the Dunbar number, i.e. 150, of population stability:

“Even with plenty of food and no pressure from predation, the population never exceeded 200 individuals, and stabilized at 150.”

Hmolscience
Hall’s work is frequently cited in efforts quantify and or formulate theories on social volume and or human volumes, in general, in physical, chemical, and or thermodynamical terms; examples found in the works Raddai Raikhlin (2003) and Libb Thims (2007). [2] Thims, in particular, employed the work of Hall and Hediger to develop aspects of human molecular orbital theory, such as explaining their so-called "attack reaction" theory: [3]

“Each animal is surrounded by a series of bubbles or irregularly shaped balloons that serve to maintain proper spacing between individuals.”

Quotes | On
The following are quotes on Hall:

“A captivating scholarly writing on how human beings react to and make use of spatial distance from a physical and psychological viewpoint, i.e. the study of proxemics. The book also deals with cultural differences in the use of space. Hall examines the French, German, English, Japanese, and Arab world comparing each with the American context and with one another.”

Quotes | By
The following are noted quotes by Hall:

“Two points are very important to remember to ask: is it real and does it work?”