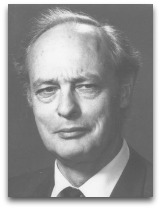 In existographies, Edward Harrison (1919-2007) (CR:4), aka “Ted Harrison”, was a British astronomer and cosmologist, generally for his 1964 solution to Olber’s paradox, retrospectively noted for his hydrogen to human, anti-chance, deism beliefs

Atomic deism
Harrison, of curious note, was a hydrogen-to-human believing Paleyan deist, i.e. he believed in atomic theory and a deism-designed universe, per reason that he objected with blind chance universal origin and sided with fine tuning arguments; the following is his noted quote:

“Here is the cosmological proof of the existence of god - the design argument of Paley - updated and refurbished. The fine tuning of the universe provides prima facie evidence of deistic design. Take your choice: blind chance that requires multitudes of universes or design that requires only one.... Many scientists, when they admit their views, incline toward the teleological or design argument.”

“Hydrogen is a light, odorless gas, which, given enough time, turns into people.”

Quotes | By
The following are quotes by Harrison:

“Life exists on earth because protons are shy creatures. When brought face to face, they take a considerable time in deciding whether to like each other. Before their minds are made up they have moved apart and gone their separate ways. A similar thing happens to people in cities; they move about, encountering one another on the streets and in the subway, and sometimes a person meets another for a fleeting moment and feels a strong attraction. But in their movement and hurry they turn aside and go separate ways, perhaps never again to meet. An attitude of reserve between strangers prevents instant intimate friendship. Protons have an equivalent inhibition, and their shyness and inability to make instant friendships is due to what is called the weak interaction.”