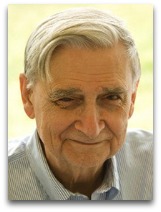 “Above all, I am not suggesting that scientific naturalism be used as an alternative form of organized formal religion. My own reasoning follows in a direct line from the humanism of the Huxleys, Waddington, Monod, Pauli, Dobzhansky, Cattell, and others who have risked looking this Gorgon in the face. Each has achieved less than his purpose, I believe, for one or the other of two reasons. He has either rejected religious belief as animism or else recommended that it be sequestered in some gentle preserve of the mind where it can live out its culture-spawned existence apart from the mainstream of intellectual endeavor. Humanists show a touching faith in the power of knowledge and the idea of evolutionary progress over the minds of men. I am suggesting a modification of scientific humanism through the recognition that the mental processes of religious belief—consecration of personal and group identity, attention to charismatic leaders, mythopoeism, and others--represent programmed predispositions whose self-sufficient components were incorporated into the neural apparatus of the brain by thousands of generations of genetic evolution. As such they are powerful, ineradicable, and at the center of human social existence. They are also structured to a degree not previously appreciated by most philosophers. I suggest further that scientific materialism must accommodate them on two levels: as a scientific puzzle of great complexity and interest, and as a source of energies that can be shifted in new directions when scientific materialism itself is accepted as the more powerful mythology. That transition will proceed at an accelerating rate. Man's destiny is to know, if only because societies with knowledge culturally dominate societies that lack it. Luddites and anti-intellectuals do not master the [partial] differential equations of thermodynamics or the biochemical cures of illness. They stay in thatched huts and die young. Cultures with unifying goals will learn more rapidly than those that lack them, and an autocatalytic growth of learning will follow because scientific materialism is the only mythology that can manufacture great goals from the sustained pursuit of pure knowledge. I believe that a remarkable effect will be the increasingly precise specification of history. One of the great dreams of social theorists—Vico, Marx, Spencer, Spengler, Teggart, and Toynbee, among the most innovative—has been to devise laws of history that can foretell something of the future of mankind.”

“If humankind evolved by Darwinian natural selection, genetic chance and environmental necessity, not god, made the species.”