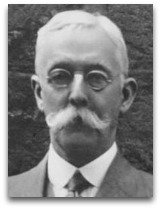 In science, Edwin Allston Hill (1850-1929) was an American chemist noted for his 1900 system, the so-called “Hill order” (see: CHNOPS), for ordering elements in a molecular formula. Hill's molecular formula ordering system was first used by the classification division of the US Patent Office in 1907. [1]

Education
Hill completed his BA in 1875 at Yale University, followed by an MA, after which he served as a lawyer and civil engineer for various railroads prior to 1895. In 1901, he switched gears, and completed an MS in chemistry, with a thesis on “Properties of Compounds of Antimony”, followed by a PhD in 1903, with a dissertation on “The Constitution of Certain Halogen Oxyacids as Inferred from Thermochemical Data”, both at George Washington University, where after he became a professor of chemistry, remaining there until 1926. [3]