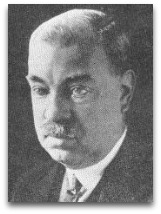 In hmolscience, Edwin Slosson (1865-1929) (CR:18) an American religion reconciling chemist noted for a number of publications on the application and integration of physics and chemistry into the humanities, such as: turnover rate (1902), his suggestion for a college department of humanized physics (1910), giving an in depth review of Wilhelm Ostwald’s 1912 book The Energetic Imperative (energetic imperative), religion and chemistry reconciliation attempts (1925), among others.

Religion | Chemistry
Slosson is unusual, as far as chemists who write on religion go, in that his belief system consisted of the core belief that "God's willings are the immutable laws of nature". [7] Beyond this staple "god = nature" Spinozian like logic, some of his later religion + science writings are semi-cogent, as far as theistic scientists go.

His 1925 book Sermons of a Chemist, e.g., attempts to integrate atoms, relativity, with the Bible and ideas on God. [3] Slosson, for example, comments on the similar views of American biochemist Albert Mathews.

In 1910, Slosson, in his Great American Universities, analysis of the programs of the top universities in America, based on funding, in his chapter on the Princeton University, stated the following: [4]

“Every university should have a Department of Applied Greek and a complementary Department of Humanized Physics, and the benefits of these departments also should be extended as freely as is practicable to those who need them most, that is, to those whose main work is in another field.”

Interestingly, and somewhat prophetically or ironically, depending on one's view, Princeton turned out to be the first to produce such a department, namely the Princeton Department of Social Physics, which ran, under the direction of American physicist John Q. Stewart, for about a decade into the 1950s.

In 2013, American justice systems professor Curtis Blakely was citing the above Slosson quote as indication of need to begin initiate the teaching of sociophysics in America's universities. [5] Other similar departmental establishment efforts can be found in recent works, efforts, and symposiums meetings of Romanians economist Gheorghe Savoiu and physicist Ion Siman, as discussed in their 2012 chapter "Sociophysics: A New Science or a New Domain for Physicists in a Modern University. The recent ongoing efforts of American electrochemical engineer Libb Thims to establish America's first physical humanities department is another example.

Major prophets
In the summer of 1910, Slosson went to the homes of the following six men, each of whom he considered a prophet of his time:

Interestingly, in comparing the latter two, Oswald and Haeckel, he states that Haeckel was led to extreme mechanism by grounding his philosophy in the first law, whereas Ostwald, arrived at a more dynamic view by emphasizing the second law, as summarized by Cynthia Russett. [6] This, however, may be in need of fact checking, as Ostwald was primarily an energeticist, i.e. first law chemist.

Other
At one point, Slosson advocated an effort to interpret history in terms of its relation to the second law of thermodynamics. On this subject, Slosson lectured before learned groups and had hoped to bring his ideas together in systematic form on some future occasion; an effort, however, that was cut short by his early death (dereaction).

Reiser
In 1935, American philosopher Oliver Reiser, a correspondent of Slosson, commented in a footnote in his book Philosophy and Concepts of Modern Science, in his discussion section on the social energetics theorists, who brought physical chemistry methods to bear on social problems, such as Wilhelm Ostwald, Henry Adams, and Thomas Carver, that “I shall do my best to carry this view a step forward”; meaning that Reiser's aim was to continue the work on the thermodynamic application to history started by Slosson. [1]

Education
Slosson completed his BS (1890) and MS (1892) at the University of Kansas and his PhD in 1902 at the University of Chicago. From 1891 to 1903, Slosson was a chemistry professor at the University of Wyoming and working chemist at the Wyoming Agricultural Experimental Station. After this, moved to New York to become literary editor of the Independent. He became head of the Science Serves in 1921. [2] Slosson also worked as a professor of journalism.