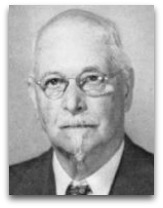 In existographies, Edwin Wilson (1879-1964) (SN:9) (CR:71) was an American mathematician, physical economist, and general "polymath" (Weintraub, 1991), whose interests spanned mathematics, physics, statistics, economics, astronomy, and biology, as summarized by George Szpiro, notable for being the sole protégé of American engineer Willard Gibbs, for teaching a physical chemistry and thermodynamics based mathematical economics course at Harvard from 1934 to 1940, and later having mentored economic thermodynamicist Paul Samuelson about using equation 133 of Willard Gibbs' chemical thermodynamics treatise to model economic stability. [5]

Education
Wilson received his AB from Harvard College in 1899 and his PhD in 1901, dissertation "The Decomposition of the General Collineation in Space into Three Skew Reflections", at Yale with Gibbs as his advisor. In 1900 he became instructor in mathematics at Yale, but took leave during the year 1902-1903 to study mathematics at Paris, chiefly at the Ecole Normale Superieure; thereafter returning to teach at Yale. He became assistant professor of mathematics at Yale in 1906. In 1907, he when to MIT where he became an associate professor of mathematics; full professor in 1911, then professor of mathematical physics, and head of the department of physics in 1917. [1] In 1918, at the start of World War I, Wilson taught a course on aeronautics and or aeronautical engineering for Army and Navy officers, after which, in 1922, he moved to Harvard’s school of public health, wherein he became professor of vital statistics, retiring from that position in 1945.

Mathematical economics | Physical chemistry based
In the 1930s, Wilson taught a physical chemistry, steam engine theory, thermodynamics based course or seminar on mathematical economics which Paul Samuelson and a few others attended. [3] Wilson discussed the details of of this course in 1934 to 1938 letters of communication with Harvard economics department head Harold Burbank; one example of which is as follows: [4]

“Schumpeter has suggested that it would be particularly well for me to give as I gave last time a general theory of equilibrium such as this is understood by physical chemists including the phase systems of Willard Gibbs. Most of our equilibrium theory in economics really has for its background the notions of equilibrium which arise in mechanics. It is pretty high-brow stuff. Mathematically or physically it isn’t any more high-brow than things which I long taught at Yale University and at the Institute of Technology. Although Pareto was certainly quite familiar with the types of equilibrium which arise in physical chemistry and are necessary in fact for the study of the steam engine he doesn’t use this line of thought in economics.”

This single paragraph, along with the amount of interaction discussed in the Harvard Pareto circle, along with the fact that in 1938 he told Paul Samuelson to use equation 133 of Willard Gibbs' 1876 700-equation thick On the Equilibrium of Heterogeneous Substances as the basis of a theory of economic stability, puts Wilson presently at the sixth position in social Newton rankings.

Vector analysis
Wilson’s first major accomplishment was the preparation, in 1901, of Willard Gibbs lecture notes on vector analysis, as presented in the 1902 textbook Vector Analysis. [2] Prior to this time, various competing techniques for handling vector quantities were at hand: William Hamilton’s 1843 quaternions, lavishly popularized by Peter Tait and the Quaternion Society, Hermann Grassman’s 1844 Ausdehnungslehre (theory of extensive magnitudes), and the physical ideas of James Maxwell and Oliver Heaviside. In his lectures, Gibbs modified the techniques of Grassman to fit the ideas of Maxwell and Heaviside as well as his own work. His resulting “vector calculus” was presented in lecturers at Yale and in an unpublished brief set of lecture notes (“Elements of Vector Anslysis”, 1881 and 1884). This work established the dominant use of the vector notation, over that of quaternion notation, whereby those, such as American physicists, use boldface notation for vectors, with a dot • for scalar products and X for vector products, exactly as initiated by Gibbs and presented in the Gibbs-Wilson textbook. [1]