In locations, Egypt (CR:42) is a country in north east Africa, with a capital in Cairo, bordering on the Mediterranean and Red seas, generally divided into the Upper Nile and Lower Nile regions.

Overview
The the following diagram shows the main 42 nomes or cities of Egypt, shown divided into Lower Egypt, containing the delta region, and Upper Egypt. Historically, in religio-mythology, the 42 gods of the first dynasty of Egypt (3100BC) became united under the state worship of the sun god Ra (among other name), and with the rise of the Roman empire became integrated or rewritten into the 42 generations or descendants between Jesus Christ and God to form the basis of Christianity, the dominate belief system of 32 percent of the modern world. 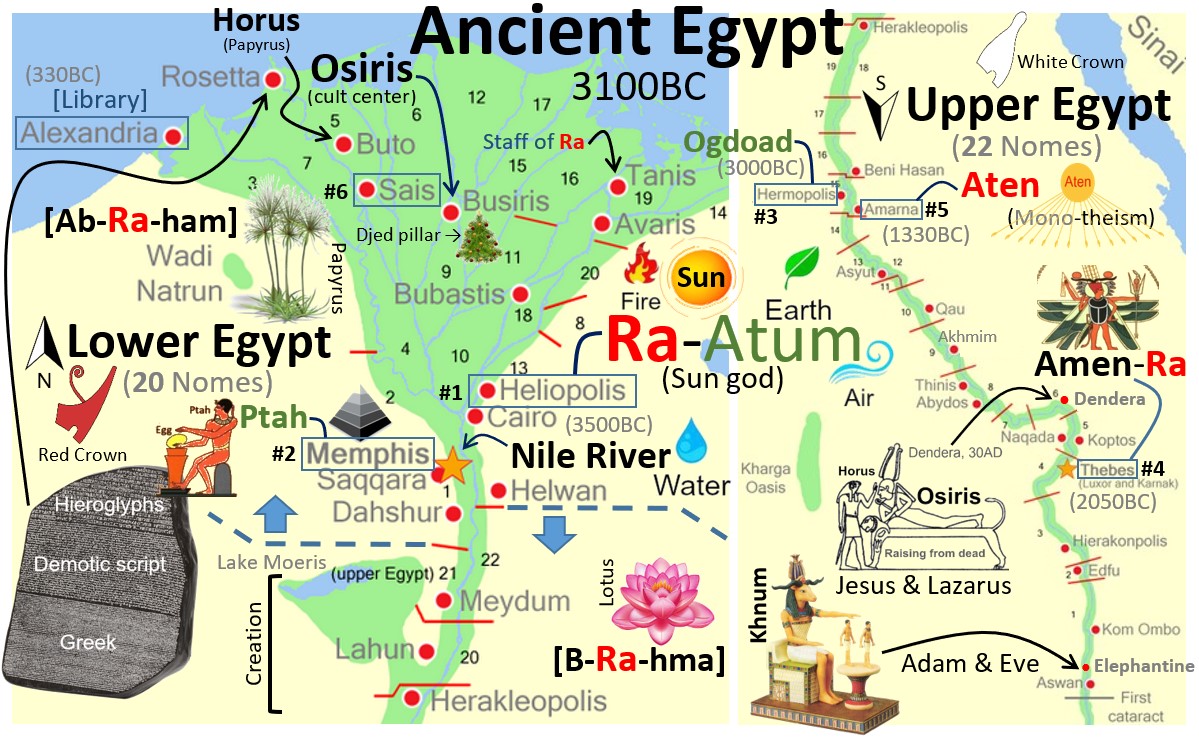 (add)
Egypt | Keme | Aigyptos | House of Ptah | Etymology
In 2500BC, Egypt, in the old kingdom, was referred to as “Kmt” (hieroglyph) or “Kemet” (with syllables inserted), based on the term “keme”, pronounced: ‘chem’, as in chemistry, meaning black soil, in contrast to the “red soil” of the desert, which was considered the “land of Set”.

In c.1150BC, Egypt, when Ptah became supreme god, came to be referred to as the “House of Ptah”, a reference to the god Ptah, who had become supreme god of Egypt in the years [add]. In other cultures, as this religious model was cross-culturally transmitted (see: god character rescripts), the god Ptah came to be called: “Jiapheta” (India, c.900BC), “Hephaestus” (Greece, c.600BC), “Vulcan” (Rome, c.400BC), and finally “Japheth” (Judea, 300BC),

In 1050 to 656BC, during the so-called “Judaic recension” (see: recension theory; supreme god timeline), the supreme gods were, generally speak, the following entities:

some, as shown above, being rescripted, via the god-to-prophet rescript method, so to affect a god reduction towards monotheism. In this period, the name of Egypt was changed from Kemet (Old Kingdom, 3100BC) to House of Ptah or Egypt; this etymological transition is summarized as follows:

The reference to the science of chemistry as the “black art” has the same root etymology, i.e. kēme as Egypt (see: chemistry (etymology)). [1]

The name of Abraham (and Brahma) also are based on the root keme (-chem), which transliterates as father (Ab-) Ra (sun god) born of the Nun (-ham), or primordial land mound arisen after the flood, the latter suffix pronounced ‘chem’ in Hebrew.
Greek philosophy
The c.600BC, Greek thinkers began to study abroad in Egypt:

“A tradition says Solon, Thales, and Plato all visited the great college at Heliopolis, and that the last-named actually studied there, and that Manetho (c.300-250BC), the priest of Sebennytus, who wrote a history of Egypt in Greek for Ptolemy II, collected his materials in the library of the priesthood of Ra.”

“Greeks, thirsting for knowledge, sought the Egyptian priests for instruction. Thales, Pythagoras, Oenopides, Plato, Democritus, Eudoxus, all visited the land of the pyramids. Egyptian ideas were thus transplanted across the sea and there stimulated Greek thought, directed it into new lines, and gave to it a basis to work upon.”

Solon, according to Plutarch, spent some time in Egypt and discussed philosophy with two Egyptian priests, Psenophis of Heliopolis and Sonchis of Sais. According to Plato's dialogues Timaeus and Critias, he visited Neith's temple at Sais (see: recension theory) and received from the priests there an account of the history of Atlantis. (Ѻ)

Greek philosopher Thales (c.624-c.546BC), who is attributed by Aristotle to have been the first philosopher in the Greek tradition, was the first to initiate the study of Egyptian philosophy, and or Egyptian mythology, of nature, by himself traveling to Egypt.

Thales, according to Aristotle, was the first Greek to suggest a single material substratum for the universe, namely, water, or moisture—according to which, even though Thales renounced mythology, his choice of water as the fundamental building block of matter had its precedent in the Egyptian tradition (cf. "Nun", the undifferentiated primordial waters before time and space and its "Ba" or "soul", the autogenetor Atum).

To Thales, the entire universe is a living organism, nourished by exhalations from water (cf. Egypt's organic, hylezoistic view on creation). Hence, Thales' significance for Greek philosophy, lies less in his choice of water as the essential substance, than in his attempt to explain nature by the simplification of phenomena. Indeed, Thales searched for causes within nature itself rather than in the caprices of the anthropomorphic gods. He was deemed the first Greek to give a purely natural explanation of the origin of the world, free from all mythological ingredients and unnecessary complexities (linearization and homogeneity). [8]

Thales also advised other Greek philosophers to go to Egypt in order to learn, such as Pythagoras: [8]

“Thales advised Pythagoras to go to Egypt and to entertain himself as much as possible with the priests of Memphis and Diospolis: it was from them that he had drawn all the knowledge which made him a sage and a scientist in the eyes of the masses.”

Pythagoras, and after him Plato, see below, accordingly, both went to study in Heliopolis, the famous university town of ancient Egypt. [7] Pythagoras, according to Sudanese-born American philosopher Monydit Malieth, supposedly, spent over a decade in Egypt, studying Egyptian mathematics (Ѻ)(Ѻ), where he supposedly learned the so-called Pythagorean theorem, named after him, the mathematical laws of music harmony, and from these his famous dictum: [2]

“The ultimate nature of reality is number.”

In 515BC, Greek thinker Heraclitus is assumed to have traveled to Egypt, being that his fire element centralized logic, amid earth and water element logic, aka three element theory, is conceptually similar to the main points of Heliopolis creation myth; Egyptian history scholar Karl Luckert (1991), e.g., argues that while it has largely been assumed that Heraclitus was a was a haughtily independent scholar, that his thinking stems from a direction of Egyptian ontological heritage. [4]

Pliny says that Democritus and Empedocles travelled in Egypt to “learn magic”. (Ѻ)

Greek atomic theorist Democritus (c.460-370BC) is reported to have traveled to Egypt, Persia, and India in search of knowledge, all along maintaining a sense of humor—sometimes referred to as the “laughing philosopher”, for his tendency to mock fellow citizens for their follies—an effort that is said to have resulted in the writing of some 60-70 books and or commentaries on diverse subjects including: ethics, logic, planets, colors, senses, air, earth’s surface, fire, geometry, geography, harmony, poetry, painting, military tactics, and diet. [5]

Greek philosopher Plato (427-348BC), of note, was said to have went, with Eudoxus (or Eudoxus when by himself), as a student to Heliopolis to study for over a decade, to learn what they could about Egyptian knowledge, likely e.g. Nun cosmology, Heliopolis creation myth, etc., therein translating some Egyptian books (or scrolls) to Greek, after which they came back to Greece to open academies for teaching. [2]

Malieth states that the following derives from Egyptian numbers theory: [2]

“Let no one enter here who is ignorant of mathematics.”

In 100AD, Plutarch, in his On Isis and Osiris, summarized the Greek study in Egypt historical precedence as following: [10

“Witness to this also that the wisest of the Greeks: Solon, Thales, Plato, Eudoxus, Pythagoras, who came to Egypt and consorted with the priests; and in this number some would include Lycurgus also. Exodus, they say, received instruction from Chonuphis of Memphis, Solon from Sonchis of Sais, and Pythagoras from Oenuphis of Heliopolis. Pythagoras, as it seems, was greatly admired, and he also greatly admired the Egyptian priests, and, copying their symbolism and occult teachings, incorporated his doctrines and enigmas.”

Religo-mythology
The following are related quotes, in respect to religio-mythology studies:

“Christianity was neither original nor unique, but that the roots of much of the Judeo/Christian tradition lay in the prevailing Kamite (ancient Egyptian) culture of the region. We are faced with the inescapable realization that if Jesus had been able to read the documents of old Egypt, he would have been amazed to find his own biography already substantially written some four or five thousand years previously.”

“The theological dependency of Christendom on ancient Egypt is much stronger than its theological link with the Hebrew tradition.”

Quotes
The following are other related quotes:

“The philosophy of the Egyptians is described as follows so far as relates to the gods and to justice. They say that matter was the first principle, next the four elements were derived from matter, and thus living things of every species were produced. The sun and the moon are gods bearing the names of Osiris and Isis respectively; they make use of the beetle, the dragon, the hawk, and other creatures as symbols of divinity, according to Manetho in his Epitome of Physical Doctrines, and Hecataeus in the first book of his work On the Egyptian Philosophy. They also set up statues and temples to these sacred animals because they do not know the true form of the deity. They hold that the universe is created and perishable, and that it is spherical in shape. They say that the stars consist of fire, and that, according as the fire in them is mixed, so events happen upon earth; that the moon is eclipsed when it falls into the earth's shadow; that the soul survives death and passes into other bodies; that rain is caused by change in the atmosphere; of all other phenomena they give physical explanations, as related by Hecataeus and Aristagoras. They also laid down laws on the subject of justice, which they ascribed to Hermes; and they deified those animals which are serviceable to man. They also claimed to have invented geometry, astronomy, and arithmetic. Thus much concerning the invention of philosophy.”

“The British and French invasion of Egypt in 1956 would never have occurred if the Eden government had properly appreciated the role of Newtonian mechanics in American history. Any student of social physics could have warned the British that the tradition of this Republic recognizes the existence of a principle separate from any given set of circumstances.”

“I remembered reading once in Plutarch (c.100AD) that all the ancient Greek wise man—Solon, Thales, Pythagoras, and Plato—had in their day gone to Egypt and been instructed by the priests in the ancient wisdom. But the full impact had escaped me at that time.”

— Jean-Marie Lehn (2006), on defending his atheism at a packed public conference at the new Alexandria Library in Egypt