Film | German
In 1974, director Siegfried Kühn (German → English) did a 103-minute German film rendition of the novel; the following being one scene: 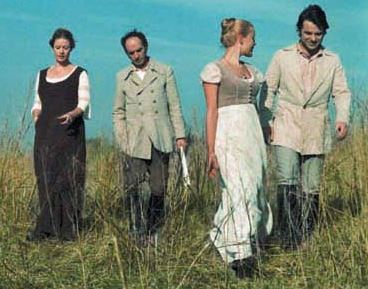 Coppola
In 1979, Francis Ford Coppola began to work on a script for an English mega film rendition of Elective Affinities, envisioned as a four-part 8-hour megafilm; the following is a 2003 statement, by Coppola, of this prolonged effort: [1]

“After Apocalypse Now [1979], I had imagined that I was going do this great work, which was going be a series of four films loosely inspired by the Goethe novel Elective Affinities. Those of you who know Elective Affinities know it’s one of the first modern novels and it’s a very simple story about a man and his wife. They’re living in an absolutely wonderful place, and the man suggests, “Oh, my friend the captain, he’s an architect, and I thought it would be nice if he came and lived with us for a while, and he could plan the gardens and stuff.” And the wife says, “Well, you know, I really… We’re so perfect and happy here that, I was going to say, my niece is—her mother has died, and I was going to invite the niece to come live.” And they said, “Well, let’s have the captain and the niece.” So you have the basic setting of the man, the woman, the other man, the other woman. In Goethe’s mind, he was working on a chemical formula. A, B, A-prime, B-prime. And I had a concept to make an ambitious film on that theme.” 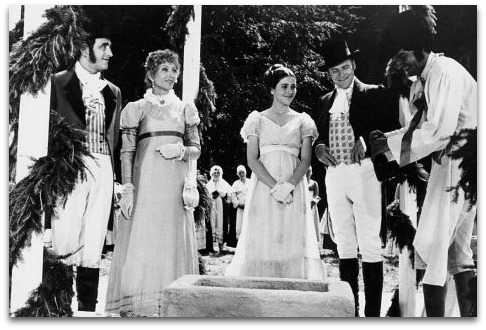 The following various covers of the 1996 French-Italian film adaptation —shown below left is Les affinities electives (Elective Affinities), written and directed by: Paolo Taviani and Vittorio Taviani; produced by: Jaen-Claude Volpi, language: Italian, with English subtitles; below right is a German VHS version:

Pornographia
In 2003, a film adaptation of Polish writer Witold Gombrowicz's 1950s novel Pornographia, which is said to be an attempted modern-day remake of Elective Affinities, utilizing chemical combination models as well as newer ideas such as Michael Faraday's 1830s lines of force models to explain lines of desire or passion, was made.

Afinidades | Affinities
In 2010, Spanish director Vladimir Cruz produced the film Afinidades (Ѻ); the film script, written by Cruz, is based on the novel Chamber Music (Musical de Camara) by Reinaldo Montero, and "inspired" by Goethe’s Elective Affinities or The Selective Affinities ("Las afinidades selectivas", as they call it in Cuba.

Cruz is Bruno, a theoretical physicist employee Nestor (Perugorría) who fears for the continuity of his job, married to Magda, a young and romantic woman, without much life experience, who plays the newcomer Gabriela Griffith. (Ѻ)

Corey Nuffer gives the following review synopsis of the film: [2]

“All films arise from scripts but not all scripts come from novels. After reading Chamber Music (Música de Cámara) by Cuban author Reinaldo Montero, Cuban actor Vladimir Cruz wrote the script for the feature film, Affinities (Afinidades). Along with fellow actor Jorge Perugorría, Cruz co-directed and starred in the film. Their efforts culminated in a film seething with the interstitial complexity that’s easily encountered in a novel but less so on screen. Consequently, Affinities tells one story but emotes something as complicated as the human condition. It’s a strange sensation to be intuiting such complexity from a film. Perhaps that’s why it will keep you thinking long after the closing credits roll. Immediately, the film conveys the sort of tension leading you to believe this story will end in someone dying. Affinities is not a thriller, however, it is drama.

The writing allows for even less breathing space as characters interact with each other with grandiose ideas and brutally short replies. Sometimes these exchanges seem truncated, as if Cruz purposefully withheld anything that would feel like resolution. The absence, then, makes for silence, something that is given fierce presence in the role of Magda (exquisitely portrayed by actress Gabriela Griffith). It is in these exchanges that your mind wanders in a gentle panic. Much like music, it is these spaces of silence or what goes unsaid that are more important than the music itself. And so you continue watching with baited breath and hope for some release.

Cruz even gives to one of the characters, the wonderful Spanish actress Cuca Escribano, the habit of speaking in questions. Indeed, while much of what she has to say provides us with the levity so scarce in this film, she is literally discussed in the movie as speaking in questions. The effect is both cute and frustrating, for many of her questions go unanswered.

With all that is happening under the surface, the plot of the film is somewhat simple: Two couples spend a weekend together on a getaway. Arriving on a Friday and leaving on a Sunday, they dine together, go boating together, sun themselves at the pool together, watch a show together and in more ways that you can anticipate and imagine, have sex. And there it is: There is a lot of sex in this movie.

Affinities can certainly be considered a part of this genre of picture, but it is also much more. In a press conference for Affinity, Cruz explains that while this is a movie much ado about infidelity, it is also just as much about the individual. He states: “We are only trying to meditate about the human being and their complexities, facing emptiness and the lack of rational explanation for many of the problems of the contemporary world, sometimes appearing that the only way out is to take refuge in instincts.” He goes on to say that the instinctual impulse ends up being sex.

No wonder why the movie carries with it such an overwhelming feeling; this is a lot to convey in 90-minutes of film, no matter how well made. Adding to everything is the political dimension: Cuba is still under US embargo. Whether intended or not, the feeling of claustrophobia in Affinities seems to carry with it room to at least ponder just how deep the complexity goes.

And if things weren’t complicated enough, Goethe is brought up. For those interested in seeing how deep the rabbit hole goes, there is a nod to Goethe’s Elective Affinities. While it will provide more place for traction, it will certainly be without solace for the questions brought up in Affinity, with or without Goethe, bear the mark of great art: They keep the conversation going.”