In Elective Affinities: IAD, the following is the reaction decipherment page of online project:

Decipherment | Reactions
A main focus of the "decoding" aspect of this project will be to determine which specific chemical reactions, of Swedish chemist Torbern Bergman's 1775, 64-affinity reaction diagrams (chemical equations), Goethe used with which to model each of his 36 chapters. Historical precidents to this puzzle include the work of English Goethean scholar Jeremy Adler, who from 1969-1990 tentatively decoded about a half-a-dozen of the reactions Goethe likely used, American Germanic literature professor and Goethean science scholar Karl Fink who in 1999 tentatively approximated the first nine reactions used by Goethe, largely for Part One of the novella.

In short, our objective, in regards to the discerning of the various human chemical reactions presented in Goethe's mind, via his coded novella, will be to show forth what exactly Goethe means by the following riddled statements concerning his “best book”, of his 142-publications collected works set:

“My idea in the new novel The Elective Affinities is to show forth social relationships and the conflicts between them symbolically [in symbolic concentration]” (28 Aug 1808) and “the moral symbols in the natural sciences, that of the elective affinities invented and used by the great Bergman, are more meaningful and permit themselves to be connected better with poetry and society” (24 Jul 1809).

In plain speak, in this above statement, Goethe tells us that the entire structure of his Elective Affinities, all 36-chapters, if we are to take this statement at face value, is the explanation of "social relationships", i.e. friendship, marriage, affairs, sexual relationships, work relations, family interactions, community engagements, etc., through the language of the "theory of affinity" (affinity chemistry)—which, as English chemistry historian James Partington correctly explains, in his 1937 chapter "The History of Physical Chemistry"—is the foundation and starting point for the science of physical chemistry—of which, chemical thermodynamics is the centerpiece—and in which the measure of “affinity” has been determined (Helmholtz, 1882) to be that of the measure of the change in the “free energy” of the reacting system or social system, which in our novella scenario is the "estate", the reaction vessel, the type of free energy, in the case of earth-bound freely-going human reactions (human-human reactions), see: human chemical reaction theory, being: Gibbs free energy.

Subsequently, if we are to take Goethe's words at face value, each chapter of Elective Affinities is framed around one of Swedish chemist Torbern Bergman’s 64 affinity reaction diagrams (see: affinity reaction) and 59-column 50-row affinity table (see: affinity table) as explained through the text of his 1775 chemistry textbook A Dissertation on Elective Attractions—at a minimum—Jeremy Adler, who did his 1977 well-researched PhD on this topic, for example, argues cogently that Goethe used over a dozen different affinity tables and affinity reaction theories in the construction of his novella. To get our feet wet into this matter, the following are the opening paragraphs of Bergman's textbook, upon which Goethe based his novella:

“It is found by experience, that all substances in nature, when left to themselves, and placed at proper distances, have a mutual tendency to come into contact with one another. This tendency has been long distinguished by the name attraction. I do not suppose in this place to inquire into the cause of this phenomena; but, in order that we may consider it as a determinate power, it will be useful to know the laws to which it is subject in its operations though the mode of agency be as yet unknown.

It has been shown by Newton, that the great bodies of the universe exert this power directly as their masses, and inversely as the squares of their distances. But the tendency to union which is observed in all neighboring bodies on the surface of the earth, and which may be called contiguous attraction, since it only affects small particles, and scarce reaches beyond contact, whereas remote attraction extends to the great masses of matter in the immensity of space, seems to be regulated by very different laws; it seems, I say, for the whole difference may perhaps depend on circumstances.”

In short, Goethe's aim was to explain "contiguous attraction", occurring between bodies on the surface of the earth in close proximity, using the symbols of chemical reactions, namely of reactants transforming into products, using the letter notation (A, B, AB, c, etc.) invented by Bergman, such as, in modern (non bracket) chemical equation format, for example the combination reaction (marriage or relationship formation):

or, as described in the caption box (above, right), the single elective attraction (single elective affinity), which famously sets the stage for the first several chapters of Goethe's novella:

in which, as Goethe would have read it, in circa 1885, the time of the German translation of Bergman's textbook, the "should upon the addition of b" (Bergman) describes the invitation of the Captain to the estate (Part One, Chapter Two), and the "on the addition of a" (Bergman) describes the recall of Ottilie back to the estate (Part One, Chapter Five), each chapter, in turn, being expanded versions of Bergman's variously described chemical reactions scaled up as models of human interaction, a principle and methodology of which that Goethe famously said was "true". In the version Goethe presented, however, he switched the lettering around, to a certain extent, using the assignments of: Charlotte (A), Eduard (B), Captain (C), and Ottilie (D).

The original 64 reaction diagrams, "click here" for larger version, presented in Bergman's textbook, as based on 122 chemical experiments, with which Goethe used to base or model the various human chemical reactions to each of his 36 chapters, are shown below: 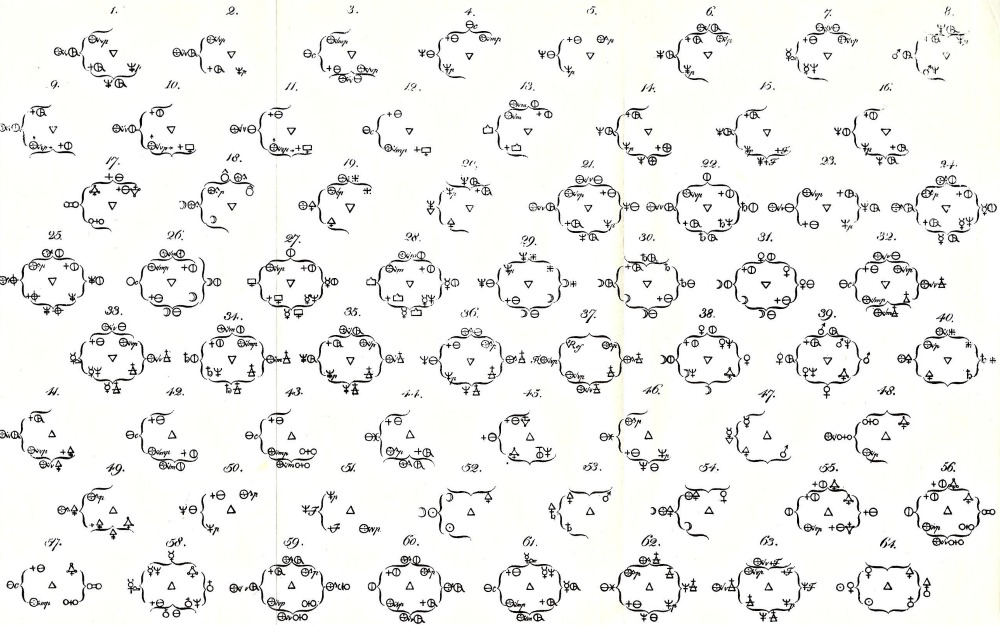 The following, to go through one example, is Bergman's reaction #20, the decomposition of calcareous hepar (calcium sulfide) by vitriolic acid (sulfuric acid): [10]

which has the following "symbol" assignments and meanings (see: Bergman's chemical signs explained):

In this chemical reaction, calcium sulfide CaS is decomposed by sulfuric acid H2SO4 in water to produce elemental sulfur S which precipitates (downward half-bracket) and calcium sulfate CaSO4, which also precipitates (down full-bracket). In modern terms, neglecting intermediates, this reaction would be written as:

In the middle of these reaction diagrams, Bergmanuses the nabla symbol ∇, the alchemical symbol for water, to indicate that the reaction occurs the wet way, i.e. in water, or according to Bergman:

“Intimating that the three surrounding bodies freely exercise their attractive powers in it.”

In other diagrams, Bergmanuses the delta symbol ∆, the alchemical symbol for fire, to indicate reactions which are performed in the dry way; which, in modern terms, these reaction condition details are typically listed over the reaction arrow, as H2O or heat, respectively, as shown in the above table. Goethe would have viewed these "reaction condition" symbols, to the effect that the air, water, fire (day light and sun heat), landscape, housing, and food, etc., would create the reaction environment in which the characters in or entering into the grounds of the estate could "freely exercise their attractive powers in it". [10]

In more detail, Bergman's reaction #20 shows, in his own words, the "decomposition of calcareous hepar by vitriolic acid", as re-shown below:

The "+" sign here seems to indicate "with the addition of" [species indicated]; a reaction which, in words, is such that the calcareous hepar,described such that it has its "proximate principles [are] united", which are calcareous earth (calcium oxide, CaO) and sulphur (S):
is decomposed [reacts with] vitriolic acid (sulfuric acid, H2SO4):
in water, ∇ (H20), indicating that “the three surrounding bodies freely exercise their attractive powers in it”, to form gypsum and elemental sulphur:
The separation of the signs of calcareous earth and hepar inside the vertical bracket { represents breaking of the combination of these two “proximate principles” by the action of the vitriolic acid, which “attracts calcareous earth more strongly than sulphur does.” The signs of the calcareous earth and vitriolic acid are placed side by side above a complete horizontal bracket—the indication that a new combination—the point of which is turned downwards to imitate that the new compound (vitriolated calcareous earth or gypsum) is precipitated. The fact that sulphur, which is the other product of the reaction, also precipitates, is indicated by turning downwards the point of the lower horizontal half bracket. [12] In modern terms, calcium sulfide CaS is decomposed by sulfuric acid H2SO4 in water calcium sulfate CaSO4, which precipitates (down full-bracket) and to produce elemental sulfur S which precipitates (downward half-bracket); which, neglecting intermediates, would be written as:

This reaction, of course, is an example of a single elective affinity (reaction), and in Bergman chemical species letter notation would be categorized as the following "type" of reaction:

This outline thus explains the "symbols" Goethe had in mind in the writing of his greatest work.

Reaction force | Affinity arrow
The "dart" or reaction arrow (→), which, according to the pioneering reaction diagram methods of Scottish physician-chemist William Cullen, shows the dynamic joining of the substances between which the attractions are the strongest, and hence the forces acting between them, thus showing the result of the reaction, of significant note, were not used in Bergman’s reactions, as seen above. As explained by English affinity chemistry historian Alistair Duncan from his introduction section to the 1970 English reprint edition of Bergman's A Dissertation on Elective Attractions: [1]

“Cullen’s diagram closely resembles that used by Bergman except that Bergman uses no arrows or other symbols to show the forces acting, but merely shows which substances are combined at the start and finish of the reaction without any implications about cause.”

Goethe, however, had integrated some the Cullen reaction arrow logic into his model in regards to the arrow representing the "forces acting" to cause the reaction. He gives indication of this in his 1796 Third Lecture on Anatomy (see: Goethe timeline), wherein he states:

“To facilitate our comprehension of the concept of organic existence, let us first take a look at mineral structures. Minerals, whose varied components are so solid and unchanging, do not seem to hold to any limits or order when then combine, although laws do determine these conditions. Different components can be easily separated and recombined into new combinations. These combinations can again be taken apart, and the mineral we thought destroyed can soon be restored to its original perfection. The main characteristic of minerals that concerns us here is the indifference their components show toward the form of their combination, that is, their coordination or subordination. There are, by nature, stronger or weaker bonds between these components, and when they evidence themselves, they resemble attractions between human beings. This is why chemists speak of elective affinities, even though the forces that move mineral components [or humans] one way or another and create mineral structures are often purely external in origin, which by no means implies that we deny them the delicate portion of nature’s vital inspiration that is their due.”

Here, Goethe specifically states that he views elective affinities, i.e. those attractions and repulsions that move humans or chemical components one way or the other, as being under the operation of "forces", that are often purely "external in origin", very ingenious, indeed—especially for such a time in history—a view nearly considered blasphemous in modern times (e.g. see crackpot, self-drive, Moriarty-Thims debate, etc.) owing to the engrained ignorance that is a result of the two cultures knowledge fanning effect.

, pg. 358). MacMillan and Co.
(b) The exact publication of Van't Hoff likely being his 1884 Studies in Chemical Dynamics.