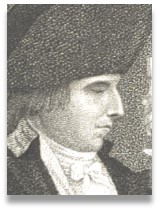 Overview
In 1801, Palmer published Principles of Nature: Development of the Moral Causes of Happiness and Misery among the Human Species, wherein, in a manner similar to Thomas Paine’s Age of Reason (1794), he attacked religion, e.g. he argued that the flawed teachings of Jesus were responsible for Christianity's sordid history, that he preferred "the correct, the elegant, the useful maxims of Confucius, Antoninus, Seneca, Price, and Volney". [1]

In 1802, Thomas Paine began to correspond to Palmer, dating his letters as follows: [2]

This is one of the first attempts at a secular dating system, on record.

Quotes | Employed
The following are quotes employed by Palmer:

“I’ll not be made a soft and dull eyed fool, to shake the head, relent, and sigh, and yield to Christian intercessors.”

Quotes | By
The following are quotes by Palmer:

“Reason, which is the glory of our nature, is destined eventually, in the progress of future ages, to overturn the empire of superstition.”

— Elihu Palmer (1801), Principles of Nature: Development of the Moral Causes of Happiness and Misery among the Human Species (Ѻ)

“Another important doctrine of the Christian religion, is the atonement supposed to have been made by the death and sufferings of the pretended Saviour of the world; and this is grounded upon principles as regardless of justice as the doctrine of original sin. It exhibits a spectacle truly distressing to the feelings of the benevolent mind, it calls innocence and virtue into a scene of suffering, and reputed guilt, in order to destroy the injurious effects of real vice. It pretends to free the world from the fatal effects of a primary apostacy, by the sacrifice of an innocent being. Evil has already been introduced into the world, and in order to remove it, a fresh accumulation of crimes becomes necessary. In plain terms, to destroy one evil, another must be committed.”

— Elihu Palmer (1801), Principles of Nature: Development of the Moral Causes of Happiness and Misery among the Human Species [1]