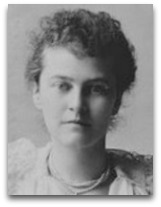 In hmolscience, Elizabeth Cameron (1857/60-1944), or “Lizzie Sherman”, prior to her 1878 arranged marriage, to senator J. Donald Cameron, and “Elizabeth ‘Lizzie’ Sherman Cameron”, thereafter, was, supposedly, American physical humanities historian Henry Adams' side relationship love affair in whom, via some 100s of letters, written over the years 1883 to 1912, he confided in a number of telling things, e.g. "No one shall persuade me that I am not a phase" (1908), in respect to his physicochemical belief that he was some type of chemical "equilibrium" atomic arrangement, defined by the chemical thermodynamics of American engineer Willard Gibbs.

Overview | Pre Clover
In Jan 1881, Adams met Cameron for the first time in the drawing room of the house of John Hay can Clara Hay. [1]

On 19 May 1883, when Cameron and her husband departed for Europe, Adams initiated a correspondence with Cameron, expressing unhappiness with her departure and his longing for her return.

On 7 Dec 1884, exactly one year before the suicide of Clover Adams, Henry Adams' wife, Adams wrote to Cameron:

“I shall dedicate my next poem to you. I shall have you carved over the arch of my stone doorway. I shall publish your volume of extracts with your portrait on the title page. None of these methods can fully express the extent to which I am yours.”

On 12 Apr 1885, Adams, while on an extended work stay-over in Washington, wrote Clover the following:

“Social chemistry—the mutual attraction of equivalent human molecules—is a science yet to be created, for the fact is my daily study and only satisfaction in life.”

It would seem, here, to be the case, speculatively speaking, that the three human molecules Adams had in mind in this statement, subsequently, would have been himself, his side love affair Elizabeth Cameron, and his wife Clover Adams.

On 4 Dec 1885, two days before her suicide by cyanide (Dec 6 or 7), Clover Adams, visited Elizabeth Cameron, who was then three-months pregnant. [1]

Overview | Post Clover
On 15 Sep 1908, Adams, at the age (reaction extent) of 70, wrote Cameron about his Jul 1908 mental paralysis incident, confiding in her that he might have two more years left before his mind goes: [3]

“If I can get two more years, without a breakdown, I shall do well enough, but I doubt it. The margin is wide.”

On 29 Sep 1908, Adams wrote Cameron the following telling insight about his encounter with the chemical thermodynamics equations of Willard Gibbs: [4]

On 24 Jan 1910, in his letter to Cameron, Adams, supposedly, according to American social energetics historian Eric Zencey (1983), “smirked”, or something to this effect, that the terms he employed in his entire physicochemical dynamic theory of history were but metaphor. [2] This, however, may be a distortion of facts (check), as Zencey frequently gets his facts wrong or misaligned. Moreover, this does not at all conform to Adams five decade long modus operandi.

Other
The following is another noted correspondence in need of fact checking:

“The solution of mind is certainly in the magnet.”

Birth date
There seems to be some inconsistency in respect to Cameron's birth date.

Biographer Arline Tehan states that on the time of her marriage on 9 May 1878, Cameron was 20-years old, which situates her birth date at 1858. [1]