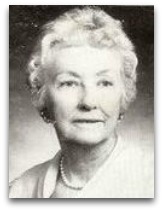 In existographies, Elizabeth Dole Porteus (1911-2010) (CR:10) was an American writer and philosopher noted, in philosophical thermodynamics, for her "impulse theory" of happiness, on the relationship between thermodynamics and happiness. [1] Her generalized philosophy about life is that since, according to the generalized colloquial point of view of the second law as a “law of disintegration”, meaning that “complicated arrangements always break down into less complicated ones”, a state of happiness in life will ensue when one follows the "impulse of integration". [2]

Overview
Porteus obtained her bachelors degree in child study at Vassar College and a masters degree in social work at the Smith College School. In college, a Vassar Professor challenged her to come up with her own philosophy. This stimulus drove Porteus, over the next sixty years, to develop a thermodynamic-based view of child-raising, working, and living as described by her theory of happiness.

Other
Porteus, of curiosity, being the daughter of American self-made industrialist James Dole (1877-1958), aka the “Pineapple King”, the founder of Dole Food Company, was as a child known as the “pineapple princess” of Hawaii, having a bit of American royalty upbringing. (Ѻ)