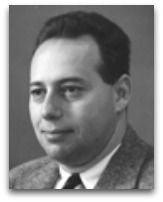 In human physics, Elliott Montroll (1916-1983) was an American chemist, mathematician, physicist, and statistical mechanicist noted for his 1974 Introduction to Quantitative Aspects of Social Phenomena, coauthored with Wade Badger, which tends to get cited in econophysics histories as being on the first books to apply statistical physics methods to sociology, or something along these lines. [1] Montroll and Badger, in their book, discuss the application of probability to traffic flow, income distributions, floods, and the stock market. [3]

Molecular comparisons
Montroll seems to employ a certain number of humans to molecules comparisons (see: human molecular formula), and in one section of this book give the following formula for the total kinetic energy of the

molecule in a system, being supposedly a socioeconomic system:

This is pretty decent logic. Here, Montroll seems to be making a reference to the Pareto principle of wealth distribution.

Other
Montroll has also commented on the Vienna school of statistical thermodynamics. [2]