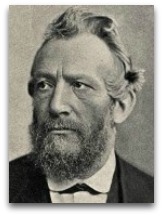 Goethe vs Darwin
In 1882, Reymond, aged 64, in his “Goethe ad Infinitum”, an address given on the occasion of his installation as Rector, attacked and belittled Goethe’s theory of evolution as metamorphosis, saying in effect Goethe would have been better off had he not ventured into science, and instead touted Darwin as the intellectual hero; this is summarized by Gabriel Finkelstein (2013) as follows: [5]

“Goethe contributed far more to natural history. The metamorphosis of plants, the discovery of the intermaxillary bone in human beings, and the vertebral theory of the skull gave proof of the poet's talent and industry; still, du Bois-Reymond wondered whether he might better have spent his time writing. Goethe's work in biology had little effect on his contemporaries, and later investigators replicated his achievements. "Science therefore progressed not through Goethe," du Bois-Reymond declared, "but rather with him and around him. —"Voltaire offered an illuminating contrast: instead of cursing Newton, he popularized the English genius and paved the way for the triumph of French physics?'

Du Bois-Reymond ended his lecture with a set of contemporary reflections. Four weeks earlier, at a plenary session of the Congress of German Scientists and Physicians, Ernst Haeckel had named Goethe one of the most important forerunners to Darwin. Du Bois-Reymond disagreed, arguing that Haeckel's pronouncement held only for the idea of descent. However, there was nothing remarkable in Goethe's belief in common ancestry. "Anyone with even a moderate familiarity with paleontology," du Bois-Reymond explained, "will immediately be led to the idea that life has evolved sequentially to greater perfection. Were he to deny this, he would have to conclude that life either arose out of nothing or appeared in its current stage of development."

Pressing his point further, du Bois-Reymond argued that Goethe's contemporaries must have been aware of the concept of evolution or else they would not have opposed it. "The difference between them and the pre-Darwinian adherents of descent lies in the fact that they did not overlook the apparently insurmountable difficulties of the theory?' In contrast, Goethe simply posited the doctrine of transformation, never refuting the "grounds of the older zoological school for the invariability of species" and never discussing the "problems for the theory of descent arising front the imperfection of the geological archive.' Goethe viewed the world as a "great, beautiful, unified cosmos?' Such an attitude tied him to the past. The central tenet of Darwinism, du Bois-Reymond reminded his audience, was not descent but natural selection, a mechanism that would have left the poet aghast. Little matter—modern society had learned to face the consequences of Darwinian evolution as dispassionately as it had the horrors of a train-wreck. Goethe's science was antiquated; what counted was his literature?'”

Here, we see a huge intellectual downgrade ↓ for Reymond, from his illustrious beginnings as Lucretius-siding atomist. His "rector promotion" must have went to his head?

Overview
In 1840s, Reymond was a key player in the formation of the so-called Helmholtz school, a philosophy centered on the notion of a purely physical science based physiology and psychology.

In 1842, Reymon made the following pact (see: Reymond-Brucke oath) with Ernst Brücke: [1]

“[We pledge] to put in power this truth: no other forces than the common physical chemical ones are active within the organism. In those cases which cannot at the time be explained by these forces one has either to find a specific way or form of their action by means of physical mathematical method, or to assume new forces equal in dignity to the chemical physical forces inherent in matter, reducible to the force of attraction and repulsion.”

Meaning, in their view, that only the principles of physics and chemistry operate inside of organisms.

World enigmas
In 1880, Reymond, in Leibnitz session of the Berlin Academy of Sciences, distinguished seven world enigmas, enumerated as follows: [2]

1. The nature of matter and force.
2. The origin of motion.

3. The origin of life.
4. The (apparently preordained) orderly arrangement of nature.

5. The origin of simple sensation and consciousness.

6. Rational thought, and the origin of the cognate faculty, speech.
7. The question of the freedom of the will.

Numbers: 1, 2, and 5, Reymond, as discussed by Ernst Haeckel (1899), deemed entirely transcendental and insoluble; numbers 3, 4, and 6 were deemed soluble, through extremely difficult; on #7, Reymond was undecided.

Education
In 1838, Reymond, aged 20, read Lucretius’ On the Nature of Things, which converted him to a positivist view of biology (powered chnopsology), meaning that he dispensed with teleology, vitalism, and other romantic notions. [3]