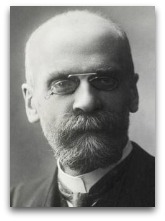 In existographies, Emile Durkheim (1858-1917) (IQ:170|#351) [RGM:333|1,500+] (Scott 50:9) (HCR:22) (CR:36) was a French sociologist notable for his 1893 initiative to define a social system using some type of systems theory and or general systems theory, for providing, supposedly, the first solution to the Spencerian dilemma, and for his physical sociology like descriptions of human phenomena, such as suicides, religion, etc., in physics terms such as: forces, currents, heat, or electricity. [1]

Chemistry | Social compounds
In 1893, Durkheim, in his Division of Labor in Society, according to Daniel Rigney, employed the language of chemistry when he spoke of social cohesion and or bonding, or the formation of, supposedly, stable "social compounds"; see also: John Boodin, on similar Durkheim discussions. [12]

“Durkheim puts forward the thesis that society is a dynamic system and the seat of moral life. It is neither a mechanical robot not an organism limited by the structure and function of its organs and the possibilities of its environment. The Durkheimian individual is a homo duplex, both I and We. This is a polarity, not an antithesis, which is deeply rooted in his conception of society and of its moving forces.”

Forces | Currents
Durkheim is said to have borrowed terminology from the electrical sciences, such as ‘collective forces’ and ‘currents’, and thermodynamics. [3] He argued, for instance, that religions influence a ‘dynamogeneic influence’ on people; this term modeled, it seems, on the dynamo, a device that converts the mechanical motion, specifically of a rotating magnet located in a coil of wire, into electric current. [4]

In 1893, Durkehim, in his The Division of Labour, employed an organic analogy throughout, in which he used the language of ‘collective forces’ and ‘social currents’ and in general the analogy of thermodynamics and electricity. [7]

His 1897 monograph Suicide is said to be full of such language: for each people there was ‘a collective force of a determinate amount of energy, impelling men to self-destruction’ and such forces ‘determine behavior from without, just like physico-chemical forces’ and their strength can be measured ‘as one does the strength of electric currents.’ [7]

In a 1898 letter to the American Journal of Sociology, Durkheim argued that ‘suicidogenic currents’ of the way in which individuals are associated in the ‘social organism’ is chemical in the manner in which those individuals are transformed. To cite another example, at one point he reasoned to the effect that: [5]

“Religious forces spread out and diffuse with extreme facility in the same way in which heat or electricity which a body has received from some external source may be transmitted to the surrounding medium.”

It remains to be tracked down exactly what physical scientist Durkheim culled these extrapolation idea from?

Unbridgeable gap?
The following is a 1895 unbridgeable gap like statement by Durkheim, which stirred a certain amount of re-quoting and discussion: [8]

“If we begin with the individual, we shall be able to understand nothing of what takes place in the group. In a word, there is between psychology and sociology the same break in continuity as between biology and the physico-chemical sciences. Consequently, every time that a social phenomenon is directly explained by a psychological phenomenon, we may be sure that the explanation is false.”

Notes
It remains to be seen if Durkheim ever actually used the term ‘thermodynamique’ in his writings? The connection of Durkheim to thermodynamics may be a secondary interpretation by other authors, such as Steven Lukes (1982). [5] Durkheim, however, did, in general, seem to conceive of society as a system of forces. Durkheim, to note, was the general editor of the 1900 Year in Sociology, in which a one-page review of French sociologist Maurice Hauriou’s 1899 book Lessons on Social Movement, by French sociologist Celestin Bougle, was found, describing Hauriou’s attempt to explain social movement in terms of thermodynamics. [6]

Quotes | By
The following are notable quotes:

“This obligation is the proof that these ways of acting and thinking are not the work of the individual but come from a moral power above him, that which the mystic calls ‘god’ but which can be more scientifically explained.”

“Religious forces spread out and diffuse with extreme facility in the same way in which heat or electricity which a body has received from some external source may be transmitted to the surrounding medium.”

“This obligation is the proof that these ways of acting and thinking are not the work of the individual but come from a moral power above him, that which the mystic calls ‘god’ but which can be more scientifically explained.”

“If the science morals and law, as we are trying to make it, were sufficiently advanced, it would be able to play in relation to moral facts the same role that astronomy plays in relation to astronomical facts. One would go to it in order to discover in what moral life consists. But this science of morality is only now being born, and the theories of philosophers coincide so little with our intentions, so little do they set themselves the object that we have in view, that they are unanimously opposed to our way of looking at and studying moral facts. They cannot, then, serve us as authorities in the same way. It would be very wrong, however, to suppose that I exclude them completely. I only deny them the prerogative and primacy that has too often been accorded to them. They also are instructive as facts. They teach us what passes in the public mind of one particular epoch and they must therefore be accounted for. What I refuse to admit is that they express moral truth in a particular eminent manner, in the same way that physics or chemistry expresses the truth about the order of things coming under the head of physico-chemical.”