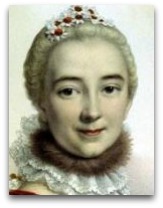 In existographies, Emilie Chatelet (1706-1749) (IQ:180|#45) [RGM:649|1,500+] (CR:20) was a French mathematician and physicist noted for her circa 1740 postulate that living force or vis viva (kinetic energy) could be converted into dead essence or vis mortua (potential energy) and that the sum of the two quantities, being interconvertable, would remain constant, a conclusion she supposedly derived during her translation into French of Isaac Newton’s Principia.

Chatelet’s theory of the interconversion of vis viva and vis mortua is said to be a forerunner to the conservation of energy; as well as to the Lagrangian and Hamiltonian. [1]

In 1733, Chatelet began to take lessons advanced geometry and algebra with Pierre Maupertuis. [2]

Romance
Chatelet was not only romantically linked to Voltaire, and Pierre Maupertuis, who was her tutor, but also, interestingly, to extreme atheist thinker Julien la Mettrie. [3]

Gravesande
In 1720, Dutch physicist Willem Gravesande conducted an experiment in which brass balls were dropped with varying velocity onto a soft clay surface; the possible experimental apparatus (see: Leiden University) of which shown below:

Gravesande found in his experiments that a ball with twice the velocity of another would leave an indentation four times as deep, that three times the velocity yielded nine times the depth, and so on. He shared these results with Chatelet, and with Voltaire (Chatelet's companion), after which she subsequently corrected Newton's formula E = mv to E = mv².

In her 1740 Lessons in Physics, Chatelet, supposedly, combined the theories of Gottfried Leibniz and the practical observations of Dutch physicist Willem Gravesande to show that the energy of a moving object is proportional not to its velocity, as had previously been believed by Newton, Voltaire and others, but to the square of its velocity. Hence it is said that where as Gravesande provided the experimental data for the formula of kinetic energy, Chatelet provided the formulaic explanation.

Quotes | On
The following are related about quotes:

“My youngest flaunts her mind and frightens away the suitors.”

“She speaks with great rapidity ... her words are like an angel.”

“Mme Du Chatelet, at the height of her career, [was] a self-proclaimed mathematician and physicist, acknowledge in her own lifetime as a genius, [and] accorded the title of philosopher by her contemporaries.”

“God behaves like a strange king who wanted to test the obedience of his subjects on ridiculous things, and who punished them afterward well beyond their crimes. If only Adam and Eve had been punished, one could strive to save the conduct of God from the reproach of malignity and injustice. But it is claimed that the entire race of men was cursed for this mistake, and that we all carry the burden of Adam’s sin, a burden that is no less than our eternal damnation.”

“If I were king, I would redress an abuse which cuts back, as it were, one half of human kind. I would have women participate in all human rights, especially those of the mind.”