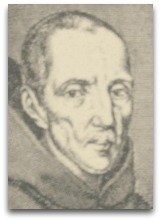 In existographies, Emmanuel Maignan (1601-1776) was a French physicist and theologian, noted for []

Overview
In 1653, Maignan, in his four-volume Course on Natural Philosophy, gave the most detailed account, of four known accounts, including those by: Magiotti, Zucchi, and Kircher, of the 1639 Berti vacuum experiment. [1]

Maignan, in his Berti vacuum discussion, offers (Ѻ) the argument that the reason the bell can be heard in the vacuum is that vibratory motion of the bell is conducted through the solid mounting and into the air.

Quotes | On
The following are quotes on Maignan:

“In the 1640s, Berti’s experiment appears to have remained entirely unknown except to the people actually involved, until Magiotti wrote to Mersenne in 1648 and Zucchi published his anonymous pamphlet in the same year. Who actually saw it, besides Berti? Certainly, Kircher, Magiotti, and Zucchi (Ѻ); and as we have seen, Maignan knew all about it. De Waard (1936) thinks Michelangelo Ricci (Ѻ) may have been there, but there is really no direct evidence for this assumption; nor is there any reason to believe that Torricelli witnessed the experiment. If Ricci was there, it would be strange if Torricelli did not hear of it from him, as Ricci was his mathematical executor. But Magiotti, near the end of the letter from which we have already quoted, specifically states that he wrote to Torricelli about the experiment, with the suggestion that if the water had been sea water, it would have stood lower in the tube. ‘They’, presumably Torricelli and Viviani (Ѻ), he tells Mersenne, ‘made experiments and finally came to the use of quicksilver’.”

Quotes | By
The following are quotes by Maignan:

“At length, when the tap R was opened the water flowed, contrary to the hope of many (e.g. Athanasius Kircher and Nicolo Zucchi), out of the pipe into the cask EF, to an easily observable height; but not all of it flowed out, and it soon stood quite still. This was clear, because a mark was made in the cask at the surface of the water, and next day it was found that the water in it had remained exactly at the mark although the tap R had been open all the time. Then, when this tap R had been carefully closed again, the screw D was taken out above. And as soon as it was taken out, behold [!] the air rushed in with a loud noise, filling the space previously abandoned by the water. Then by lowering a sounding-line, it was determined how much water was inside, or rather to what height the water stood in the tube, and it was found to stand about 18 cubits above the level of the water in the cask, at mark L.”