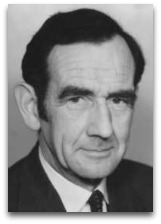 In hmolscience, Emyr Alun Moelwyn-Hughes (1905-1978), oft-cited as E.A. Moelwyn-Hughes, was a Welsh physical chemist noted for 1947 frequently requoted (e.g. Philip Ball, 2004) aphorism that "energy among molecules is like money among men. The rich are few, the poor numerous".

Overview
In 1947, Moelwyn-Hughes, in his The Kinetics of Reactions in Solution, employed a proto-econophysics logic, when he compared money to energy and men to molecules: [1]

“Energy among molecules is like money among men. The rich are few, the poor numerous.”

This saying is known in modern terms as the Pareto principle, named after Vilfredo Pareto. [2]

Education
Hughes, the son of a minister, completed his BS in 1926, PhD in 1928, and DSc in 1933 at the University of Liverpool, much of which was focused around an interest in chemical reaction kinetics; after which he became a physical chemist at the University of Cambridge, focusing on the kinetics of reactions in solution. His magnum opus was his 1957 Physical Chemistry textbook. [3]

“The complete physical chemist blows his own apparatus and solves his own equations.”