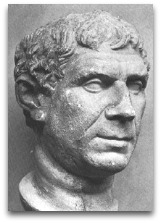 Annals
In c.180BC, Ennius penned Annals, comprised of eighteen books of Roman history in hexameters, which become the authoritative version of Rome’s rise from the fall of Troy (and thus the Trojan migration to Italy) up to the censorship of Cato; popularity and authority of the Annales led to hexameters replacing Saturnian verse as the preferred meter of epic (and epic-like) poems. (Ѻ)

Quotes | On
The following are quotes on Ennius:

“They do not know the nature of the soul: if it is born or at birth slipped into us; whether, destroyed by death, it dies with us, or goes to see hell’s broad and lightless pools, or by some miracle passes to other creatures [see: transmigration], as our loved Ennius sang, who first brought down from lovely Helicon garlands evergreen to grow in fame wherever Italians live. Yet Ennius claimed the underworld exists, and told his tale in deathless verse, a place where neither soul nor flesh lives on but a sort of 'images', pale and eerie things.”

“Is it not a wonder that anyone can bring himself to believe that a number of solid and separate particles by their chance collisions and moved only by the force of their own weight could bring into being so marvelous and beautiful a world. If one believes such a thing possible, I cannot conceive why one would not believe as well that by haphazardly throwing a vast quantity of the twenty-one letters onto the ground, the result could be Ennius’ Annals, such that they could then be read. I doubt if chance could by itself complete even a single line.”

Quotes | By
The following are quotes by Ennius:

“An ugly brute the ape may be, but how he resembles you and me!”