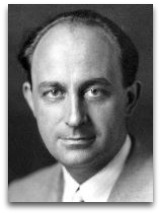 In existographies, Enrico Fermi (1901-1954) (IQ:190|#46) [RGM:35|1,310+] (CR:52) was an Italian-born American physicist, a high-ranked greatest physicist ever, contender for last universal physicist, eponym of the "fermion", noted for his 1936 booklet on thermodynamics, which resulted from a course of lectures held during the summer session at Columbia University, New York. The entire booklet is 160-pages, including the index, making it one of the shortest books on thermodynamics. [1]

While writing the appendix for the Italian edition of German astronomer August Kopff's book Foundation of Einstein's Relativity, Fermi, supposedly, pointed out, or discerned, for the first time, the fact that hidden inside the famous Albert Einstein's 1905 mass-energy equivalence equation (E = mc²), there was a enormous amount of energy (nuclear energy) to be exploited.

Fermi won the 1938 Nobel Prize in physics for his discovery of new radioactive elements produced by neutron irradiation, and for his related discovery of nuclear reactions brought about by slow neutrons.

Students
Six of Fermi's students won the Nobel Prize; although, to note, the brightest and most prolific of his group, Italian theoretical physicist Ettore Majorana (who did not win) would eventually burn out (1933).

Exchange force
Fermi is noted for having brought out the exchange force theory synthesized by his associate Italian theoretical physicist Ettore Majorana (1932) into the global scientific community, a few months after which Werner Heisenberg, learning of this view, would go on to pen out the fuller implications of this model in regards to nuclear bonding.

“Fermi was the last universal physicist in the tradition of great men of the 19th century. He was the last person who knew all of physics of his day.”

“Never underestimate the pleasure we feel from hearing something we already know.”

— Enrico Fermi (c.1935), cited by Steven Weinberg on whether or not to “repeat material” already familiar to historians or scientists [3]

Further reading
● Schwartz, David N. (2017). The Last Man Who Knew Everything: the Life and Times of Enrico Fermi, Father of the Nuclear Age. Hachette.